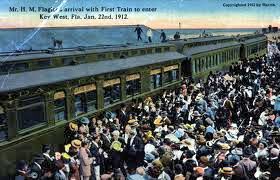 Tomorrow marks the 100th anniversary of the arrival of Henry Flagler's "Little Train that Could".     Building this railroad would be a major feat with today's technology, but to have done it between 1908 and 1912 and complete it in that short of time is incredible.

It took the 12 years to complete the bridge leading to Key Largo between 1998 and 2010, let alone bridges to span the length of the keys.    4,000 men working six days a week for 10 to 12 hours a day completed the 156 mile road bed project in  just over 4 years.    Pigeon Key was the headquarters for the project between 1908 and 1912.  This small key was home for workers lured to the project by the $1.60 a day wages for working in the hot Florida sun and surviving the mosquitoes.   "They say the two things slowed the completion of the railroad were mosquitoes and the lack of alcohol." Kelly McKinnon, Director of the Pigeon Key Foundation said. 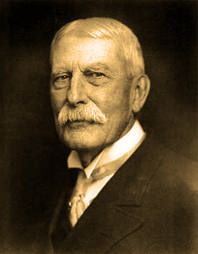 There was a fear that Henry Flagler, in his 80's at the time might die before his railroad was completed, so the men started working marathon 12 hour shifts toward the end of the project.    It was those efforts that gave the central keys city of Marathon it's name.

There were some 10,000 people that showed up on January 22, 1912 to see the arrival of Henry's Train and to greet Henry Flagler and his family as they got off the train. .    Everyone from school children to politicians showed up for the event.

Key West was Florida's most populated city and the richest per capita in 1908 and Henry Flagler successfully linked the city to the mainland.   You could ride from Miami to Key West for $7.18 or from New York to Key West for $77.00.

Henry Flagler died 18 months after the completion of the railroad.   Thousands of people made the journey on the Over-Sea Railroad for the next two decades, but the great depression and the Labor Day Hurricane of 1935 brought the Over-Sea Railroad to a grinding halt when 40 miles of track were destroyed and the locomotive was lost into the sea.

Sunday there will be a parade in Key West and Henry Flagler re-enactor, museum exhibitions and many other events throughout Florida to celebrate the centennial.     ;o)
Posted by Bahama Bob's Rumstyles at 8:30 AM No comments: