Havana Club has Released a Second Expression of Tributo
a sipping rum made from the distillery’s aged reserves, shining a light on the aguardiente in the blend. 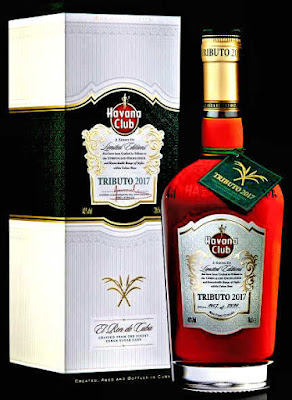 Launched last week during the annual Habanos cigar festival in Havana, just 2,500 bottles of Havana Club Tributo 2017 will go on sale around the world.   Crafted by Havana Club’s master blender Asbel Morales, from five hand-selected base rums and a 40-year-old ‘aguardiente’ spirit base matured in old barrels, the aguardiente is at the heart of Tributo 2017.   The result, according to Morales, is “an exceptional rum with a distinctive dry note and an intriguing array of flavors”.  “With only 2,500 bottles being released worldwide, we expect the expression to be popular among global rum and dark spirits connoisseurs who are looking for the next authentic Cuban rum to add to their repertoire,” said Nick Blacknell, international marketing director at Havana Club

“Tributo 2017 is a tribute to the talent of Cuban rum makers.   The extensive reserves at the Havana Club distillery provided us with a wealth of luxurious aged rums to experiment with.   “By blending a decades-old aguardiente and our precious rums, we have achieved a new rum experience that is lively and complex, with a remarkable dry taste imparted by the sugar cane character of the aguardiente and a powerful finish,” he said.
The 40% abv rum has “an amber glow and flavors of chocolate, tobacco and coffee”, and aims to showcase “the richness and variety of styles found within the Cuban rum category”.   Priced at $375.00, each 70cl bottle is numbered and signed by Morales. The racing green on the gift box pays homage to the color of the sugar cane plant.

Posted by Bahama Bob's Rumstyles at 5:38 AM No comments: