The Taste of Cayman Food & Drink Festival is the Tourism Association’s biggest fundraiser. It began in the late ‘80s when a small number of restaurants from the Cayman Islands Restaurant Association met in a field to compete in a Chili Cook-Off. The event has grown to attract thousands, with more than 45 restaurants, bars and vendors participating. There are some new features this year, including a VIP area. 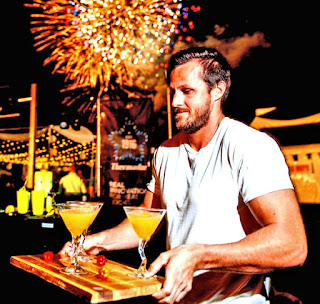 Things are being shaken up at this year’s Seven Fathoms Cayman Rum Challenge at the 29th annual Taste of Cayman Food & Drink Festival. For the first time, international competitors are going to be a part of the event.  Three U.S. mixologists who each won preliminary rounds in New York, Chicago and Miami will compete against some of Cayman’s finest in the Seven Fathoms Cayman Rum Challenge at Taste of Cayman on Jan. 28 as a part of the Festival Green, Camana Bay.   The winner will be crowned Seven Fathoms Mixologist of the Year. This year marks the first time international contestants that wone preliminary rounds will compete against local mixologists.  The three preliminary winners are Sabrina Kudic of Chicago, Benny Hernandez of Miami, and Selma Slabiak of New York.
How Do I get Tickets

For more information, contact tasteofcayman@cita.org or call 623-6700. Tickets can be bought online here. General admission tickets are $40 in advance; $50 at the gate; kids ages 5-13 are $20; and VIP tickets are $150, which includes entry to the VIP hospitality lounge, 25 food and drink tickets, one experience voucher, welcome drinks and canapes, express entry and a private cash bar.