W.C. Fields the Entertainer and the Drunk

There seems to be quit the direct connection between creativity and drinking.  So many famous
creative people have been associated with drinking.  Ernest Hemingway is as well known for his
ability to sip his daiquiri's at the El Floridita as he is for his writing.   Like so many other celebrities,
W.C. Fields brought drinking out of the closet of the Prohibition Era and on to the screen as comedy.   "It was a woman that drove me to drink and I never got a chance to thank her", has always been one
of my favorites.  One of his first major movies on the subject of drink came out in 1933, just prior to 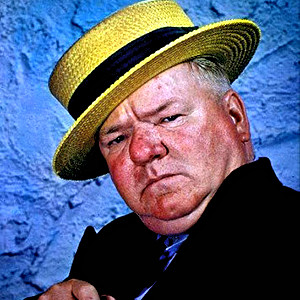 the end of Prohibition.    It was called International House, where Fields played professor Henry R.
Quail, a professor that was flying his autogyro (a strange hybrid of plane and helicopter) to Kansas
City but he got drunk and confused and ended up in China.  He did not become known as a great
actor as a result of the movie, but as an irascible drunk,   “The persona itself was the work of genius.”


He drank often and well, mostly Martinis, “I work better with them inside me,” he said, but he was not unfamiliar with Irish Whiskey, Bourbon. Scotch, Rye, red wine and sherry. He was also quite fond of rum and Coca Cola.   His staff estimated that he drank about two quarts of liquor a day.   He was always an amiable drunk, and he wore his alcoholism well, like the askew top hat, which he became famous for.  He drank at home and he drank on the set. He would often bring a cocktail shaker filled with gin to work, which he referred to as his “pineapple juice.” When a studio employee once refilled it with actual juice, Fields took a sip and bellowed, “Somebody’s been putting pineapple juice in my pineapple juice!”
His fondness for drink didn’t impair his acting, and may have improved it. “His timing was better when he was drinking,” said legendary director Mack Sennett, who certainly knew about comedy, since he was responsible for the Keystone Kops. “He was terrified of speaking lines too fast, which he sometimes did if he was sober.” 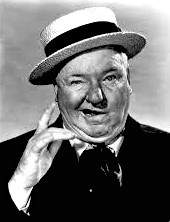 Toward the end of Field’s life, his drinking became less funny, his nose larger and redder.   Fields suffered from roseacea, did little to treat it, and helped cement a link between excess drink and scarlet snouts.    Yet he always maintained his ability to function appearing in his last film, Sensations of 1945, 72 years ago next week.  “He keeps on drinking and keeps on being funny,” said one colleague of that era, “so whose business is it except his own?”

W.C. Fields died 70 years ago. He had been a bridge between the dour temperance era, and the boozy, goofy humor of Dean Martin, Joe E. Lewis, Foster Brooks, Jackie Gleason, and Red Skelton.   His Los Angeles tombstone was famously engraved with the line, “On the whole, I’d rather be in Philadelphia.”

Posted by Bahama Bob's Rumstyles at 5:42 AM No comments: