I'm not a beer drinker personally, but I have a real problem with our oceans being littered with
plastic of any kind.   The damage it does to the marine life is one of the most serious problems that we have to deal with.  The healthy ecology of the ocean is so important to all of us, and I have to put a shout out to the Saltwater Brewery for caring enough to do something about the plastic six-pack ring. 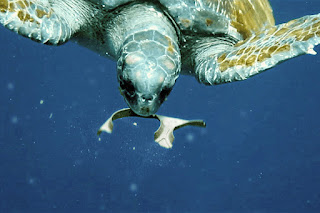 The project is the brainchild of the ad agency We Believers, which enlisted a team of engineers to create the rings and approached South Florida-based Saltwater Brewery about a partnership a couple of months ago. The conservation-conscious brewery, which is located in Delray Beach and works with charitable organizations including the Surfrider Foundation and Coastal Conservation Association, immediately jumped at the opportunity to combine its two passions, brewery President Chris Gove told Mashable.

"We believed in it so much," Gove said. "It came about through a love for the ocean and truly caring for the environment."

Created with a 3D-printed mold, the rings are made from wheat and barley leftover from the brewing process. Unlike plastic rings, which can entangle or suffocate sea life, the biodegradable rings won't harm animals if they're eaten, and won't harm the environment if they're not. 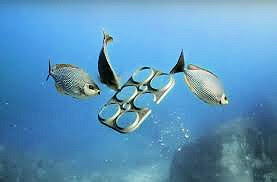 With 500 units produced last month, Saltwater Brewery and We Believers said they're planning to bring the biodegradable rings to the mass market by the end of the summer or early fall and by 2017, the team hopes to expand production to other craft breweries around the U.S.   "We want this to be the zero waste, zero carbon footprint solution for the industry," We Believers co-founder Marco Vega said. "Instead of taking two years or getting through the loops of corporate America, let's get them out and take it to the next stage, little by little."
Posted by Bahama Bob's Rumstyles at 4:45 AM No comments: