From Jerry Thomas' Bartender's Guide of 1862 to Today

Jerry Thomas was the original pioneer of cocktailing, he was the first to take the original cocktails of the day and add unusual ingredients to create new and exciting blends for the stale cocktail menus of the times.   Thomas really made a name for himself in San Francisco at the El Dorado Gambling Saloon in the Occidental Hotel.   His signature drink, the "Blue Blazer", takes whiskey then setting it on fire then  passing it between two mixing cups and creating a great blue arc between them.   Jerry only live for 55 years, but he managed to be known from coast to coast and Europe for his flamboyant style and ideas about making cocktails.    He also was known for adding a touch of showmanship to the profession of bartending. making it more a show than just being a server.


To make an improved brandy cocktail, you strained the plain version (brandy, bitters and gum syrup, plus one or two dashes of Curaçao) into a fancy wine glass, moistened the rim of the glass with lemon and added a twist of lemon to the drink. (Thomas’s book was the first to mention the twist, which replaced grated nutmeg as the final flourish to a drink.) In the improved cocktail, maraschino liqueur was substituted for Curaçao. Add fruit juice and the cocktail became a crusta.  An excerpt from a great article, "The Bartender that Started it All"  read more at http://www.nytimes.com/2007/10/31/dining/31cock.html?pagewanted=all&_r=0

Thumbing through the book, I found an interesting cocktail called the Saratoga.  Jerry Thomas seems to like to name cocktails for cities around San Francisco Bay Area.  The Martinez (Martini now) and several others.   This is a curious cocktail that combines whiskey and Brandy with sweet vermouth and a dash of bitters.   Being the rum guy that I am, I had to play with the mix a bit to create a fun cocktail that will give us rum folks a taste of the 1860's and San Francisco gold rush days and the Barbary Coast days. 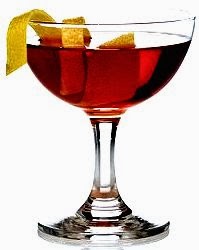 Rum Saratoga
Place all of the ingredients into a shaker filled with ice and shake until thoroughly chilled and strain into a Martini Glass and garnish with a lemon twist (an idea created by Jerry Thomas as well)
The book is available on Amazon.com, and a few other places, it has a great selection of ideas and how to make things in a proper way, something that no one before him had thought to put into a cocktail book.  There is a copy of the book on line on the Art of Drink site:  http://www.artofdrink.com/jerry-thomas/  .   Try some of the many ideas in the book and work your own magic just like what was his legacy for creating new cocktail ideas
Posted by Bahama Bob's Rumstyles at 9:15 AM No comments: