I ran across an article I just had to share with you today about two very famous Cuban barmen.

Boadas came to this world in calle Empedrado, a small street that would acquire mythical status: it borders the Plaza de la Catedral, where visitors could find the Havana Club bar, and, since 1950, it houses La Bodeguita del Medio. His parents opened a café but things weren’t going great so he left for Lloret with his mother. He stayed in the village of his ancestors until the age of 13 and then crossed once more the Atlan 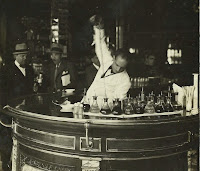 tic to learn the ropes with his father. His big break happened when he started working for his dad’s cousin, Narcis Sala Perera at the small place he operated on the corner of Obispo and Montserrate: El Floridita.

It wasn’t quite yet the trendy place it would become when Hemingway started visiting (in 1932) and praising it to all and sundry but all the same it was one of the finest bars in town. Constante Ribalaigua was already there (he arrived in 1914 and took control in 1918) and he worked with Boadas, side by side, until 1922. Lloret de Mar meeting in Havana! The greatest in the game, working behind the same bar! Those precious few years are still honoured at El Floridita: above the bar, on the right hand-side, close to the kitchen’s door, there’s one photo of the all-star team. Look for it next time. 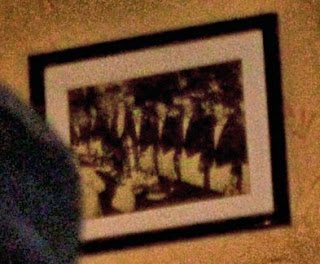 http://www.havana-cocteles.com/boadas-cocktail
The picture to the right is the one they are talking about at El Floridita.  I was lucky enough to capture it from a group shot that I took in the bar.  These two men had a huge effect on the cocktail industry and will always be remembered for their contributions.  By the way his art of throwing cocktails sit still being practiced at the El Floridita.  ;o) 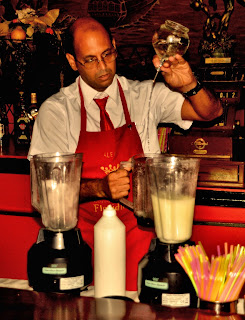 Posted by Bahama Bob's Rumstyles at 9:31 AM No comments: