Coming to America from Cuba 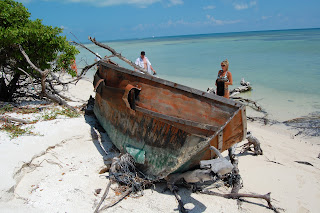 There are literally thousands of Cubans that attempt the journey from Cuba to the Florida Keys every year, many make it many more are intercepted at sea and returned to Cuba, and a few are also lost at sea.     These are desperate people trying to escape poverty and the political problems of their home land. 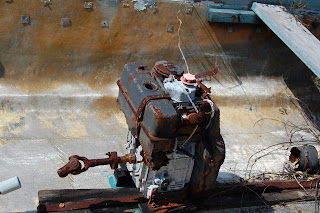 Many try to make the 90 or so mile trip across the Florida Straits in homemade tin boats.    Many of these are really inspired designs that make it to the dry land of the Marquesas Keys just West of Key West.     I have spent some really enjoyable days marveling at these crafts that successfully made the crossing and liberated her passengers from Cuba.      Some are powered by 4 and 6 cylinder automotive diesels, and one I ran across was powered by a Russian built 1 cylinder  diesel lawn mower engine. 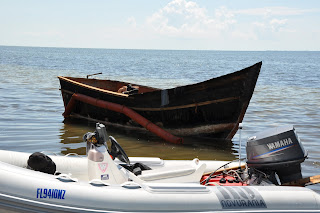 I guess that desperate times bring about desperate measures.     Especially when it come to getting out of a place where life is not good and getting to somewhere where life is portrayed as being a "Nirvana".    I have to lend kudos to the people who have tried to make the journey and all of their ingenuity, stamina, and bravery for even trying.   On one occasion returning from the Marquesas Keys in a storm, saw one of these "Chugs" at sea, but was unable to get any closer than a half a mile or so from it, and in 10 plus foot seas, wasn't going to try.   The boat was in control and very sea worthy, so I kept going on my way back to Key West.     The interesting part is that a week later I returned to the Marquesas Keys and found the boat ashore there.   It was interesting to see all of the stuff that they had aboard the boat and the sturdy construction of this boat as well.     Most of the boats are set afire upon reaching dry land to signal the Coast Guard that they were there and could be picked up.    This one however was still afloat and in very good shape considering the weather that it had gone through to reach land.

I can feel a kindred spirit with these people because I to like to venture out to sea in small boats as well.   This little 12 foot inflatable craft is what three of us ventured out on this day to find the "chug" that I had see while out in the big boat.    The is a really exhilarating feeling traveling out in the small boat the the big one just doesn't have.    It is the feel of the sea and the rising and falling of the swells out on open waters that is great fun.    ;o)
Posted by Bahama Bob's Rumstyles at 9:17 AM 1 comment: