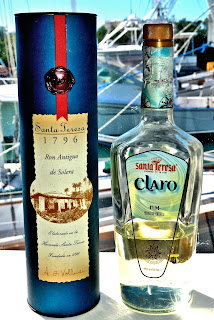 Venezuela's Santa Teresa, one of a dwindling number of successful rum companies , announced a deal with the Bacardi, for global distribution.   Despite a harrowing economic crisis in Venezuela, the rum industry appears to be the only thriving industry.   The deal will grant the family-owned Santa Teresa "a significant market expansion from the existing 34 markets, aiming for double-digit growth for its portfolio of aged rums within the next three years." The company will retain distribution in Venezuela.

Santa Teresa is one of Venezuela's top rum companies. It was founded in 1796 and began producing rum in 1885.   Over the years the company has done some modernization of its distillery, but still retains its venerable old solera aging bodega.    International sales have risen steadily in recent years - from 160,000 cases in 2014 to 200,000 cases in 2016.

After launching its own, small, selection of premium rums, this deal will provide Bacardí with a great selection of upper end rums to the marketplace.   Santa Teresa's rum is Venezuela's oldest rum producer, are distilled and bottled at a sugar-cane estate in the state of Aragua, Venezuela.
Posted by Bahama Bob's Rumstyles at 6:29 AM No comments: