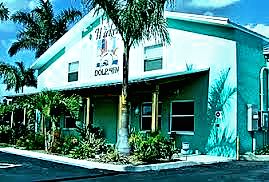 JoAnn Elardo of Cape Coral, Florida, came up with an idea for making rum in the center of Florida using the resources of her surroundings.   Today JoAnn Elardo and her associate Chris Spiro have the distillery and a  bright Turquoise colored building on Pine Island Road between Nicolas Parkway and Santa Barbara Blvd. that jumps off of the landscape.   From this little building comes an award winning silver rum that is pure Florida.

Wicked Dolphin is an artisan hand crafted rum.   Made in a 660 gallon pot still from 100% Florida Sugar Cane purchased from local farms.   Barrel aged and blended on site at the family owned and operated distillery in Cape Coral, Florida for the highest quality.     The "Silver Rum" as a bit of a straw color that comes from the barrel aging, and has not been filtered out.  Filtering will remove the color, but it also removes some of the flavor of the barrels. 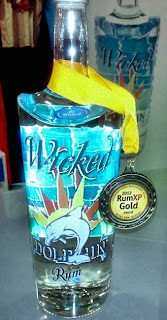 Wicked Dolphin won a best in class at the American Distilling Institute spirit competition and a gold medal at the 2013 Miami Rum Renaissance competition.   Winning medals in the first two competitions tells a lot about the quality and the process that is being followed by the team.

There was a legal issue posed by a prohibition era law in the state of Florida preventing the sale of rum where it was produced.   The had a beautiful building and you couldn't even tour the distillery, plus you could not buy the rum on site.  This posed a serious problem for the success of the business.  Ms. Elardo said "Everybody has distillery tours, if you go to Colorado, New York, or even North Carolina it didn't make sense that Florida didn't have those tours"  The Wicked Dolphin team went about to change the law.  According to JoAnn Elardo, "it was a long process and a lot of times discouraging", but worth while when Bill 347 passed unanimously.    Now the people cat tour and taste the product before they purchase it.

The project is headed straight for success and has already proven itself with two prestigious awards for their Wicked Dolphin Rum.  This looks to be a new Florida Distillery that has the talent and the means for growth and quality Florida based rums.  ;o)

Posted by Bahama Bob's Rumstyles at 8:46 AM No comments: