Tulum, The Walled City, served as a major seaport for the "Pre-Columbian Era" Mayans serving the city of Coba.   The original name for Tulum was "Zama" meaning the "City of Dawn", because of it easterly facing orientation on the 39 foot cliffs and overlooking the Caribbean Sea.   Most active between the 13th and 16th centuries, although the earliest dated item is A.D. 564.  The Mayan city managed to survive some 70 years after the Spanish began occupying Mexico.   Unfortunately it was the "Old World" diseases that were to bring the native Mayans into extinction. 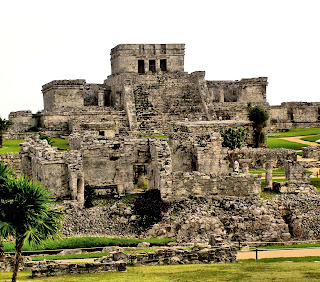 The largest structure on the site is "El Castillo" or the Castle a structure that can be seen from the sea or from inland.   It is the dominant structure of the site, although the shrine appears to have been built upon another structure.   El Castillo was  used as a beacon to guide canoes into the port.  There is a break in the reef exactly opposite "El Castillo" and it is in front of the break in the cliffs that provided the perfect location for any trading to take place.   Artifacts in the area indicate that trading at the site was one of the primary functions of Tulum. 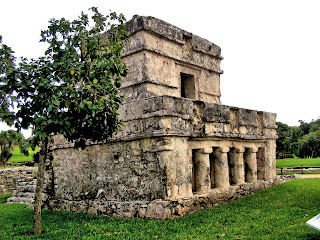 Like Chichen Itza, Coba, and the other Mayan ruins that are located throughout the Mayan Riviera, Tulum is probably one of the more spectacular to see because of it's proximity to the Caribbean sea and the towns of Cancun and Cozumel.   It is a short hour and a half bus ride from the Hotel zone in Cancun to the site and a real pleasure to wander through the ruins and wonder at what the Mayan people accomplished with so few tools.   I guess it is the enormity of the entire Mayan cities and the engineering marvels that they constructed that keeps me in aah of the Mayans.   ;o
Posted by Bahama Bob's Rumstyles at 9:28 AM No comments: