Dagger Rums are a now defunct brand of dark rum produced by J. Wray & Nephew.   This Jamaican rum was available for a hundred years throughout the world until 1952 when it was finally dropped.   From the research that I have done, it was an aromatic and viscous dark rum that was produced at 97 proof.   Produced from a blend of sugar cane juice and molasses, J. Wray & Nephew made this available in different age expressions, One Dagger -5 year, Two Dagger - 6 year and Three Dagger - 10 year.  They also produced a Dagger Punch as an 8 year old expression of the line.  J. Wray & Nephew made this rum for more than a hundred years aging it in the Jamaican mountain vaults until it was time for it to be bottled. 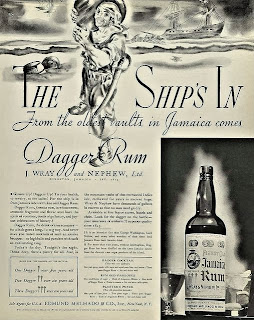 Three Dagger 10 year old rum according to "Beachbum Berry", it had a "sandalwood nose, an impossibly rich, smooth, layered taste redolent of apple, citrus and charred wood".  this rum was often mixed with fruit juices and syrups to create some of the fine tiki cocktails of the 30's through the 50's."

In a 1934 ad, the rum is described as "Dagger Rums, Jamaican rum, in whose sweet, aromatic fragrance and flavor were born in the spirit of romance, and joyous celebration of history."

In the same ad, they off several recipes for cocktails.  One a "Rum Old Fashion", is an interesting discovery, having done some serious experimenting making old fashions from rum earlier this year with some very good success. 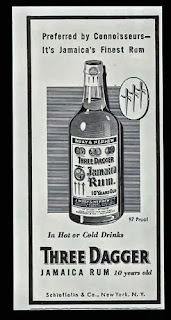 Thanks to my brother for the question about this rum that got me researching it for today's blog.  I wish I had gotten to work with it, as it has a lot of the earmarks of a Mount Gay XO or Black Barrel rum.   This was a very popular rum often found in the wells of some of the better lounges and hotels of the era.  ;o)