Here are the 2014 Rum Brand Champions as announced by "The Spirit Business".

Please welcome the newest member to the Rum Brand Champions, La Martiniquaise’s Negrita, which sailed into millionaire territory with an 11% increase in sales.

Having formed part of the French drinks group’s stable since its acquisition of Bardinet in 1993, Negrita has been the subject of intense focus for La Martiniquaise in the past 24 months. Not only has the brand re-launched globally, with new, updated packaging, but the release last year of Negrita Spiced was catalyst enough to see the brand break through the one million case barrier in 2013 and enter the Brand Champions for the first time.

Meanwhile, the title race for the world’s largest-selling rum brand will have to wait another year, after Philippine brand Tanduay failed to share its sales data in time. With Bacardi reporting a 4% decline and Tanduay now launched in the US, the brand was looking strong to become the number one international rum brand. 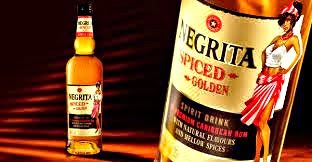 Negrita Spiced Rum is described as being flavored with vanilla and "a hint of lemon," which suggests to us a more citrus styled drink very likely designed for daiquiri cocktails or perhaps mojitos. It is sourced from the Caribbean and then blended and bottled in France.

This is a very interesting list of very strong expressions of rum from all around the world.  I am disappointed that Tanduay did not choose to become a part of this sales championship.