It is only proper that we take a moment today to give some thought to one of America's more colorful characters.    Born Ernest Miller Hemingway on July 21, 1899 in Oak Park, Illinois and died on July 2, 1961 in Ketchum, Idaho.      Famed for his writing, a World War I soldier,and his world wide adventures, Hemingway found the seeds to grow his stories and novel from.

Famous equally for his bravery during both world wars and his ability to do anything that he found interesting to him.    In Africa he was in a plane crash and the next day got aboard another plane that blew-up on take-off and survived to get to Entebbe to recover and read all the accounts of his death and his obituaries.       His love of fishing and hunting took him all over the world and little made him happier that spending days with his friends out on the ocean fishing.

In his later years following the plane crashes from which he really never full recovered.  In October of 1954 Hemingway received the Nobel Prize for Literature, a prize he truly coveted, but later he felt that the stories of his death and the obituaries that had been circulating had swayed the panel to vote his way.     He spent most of his time working on "A movable Feast" a book he finally finished in 1959.     His focus would then be on several other books that he was working on until he finally left Cuba in July, 1960.

After being admitted to the Mayo Clinic in November of 1960, there were stories of Hemingway receiving "electroconvulsive therapy" as many as 15 time.    He was described as a wreck upon his release in January of 1951.     It has been told that Ernest Hemingway's behavior was similar to that of his father's in the days before his suicide.    Even though the stories of his death were said to be accidental, he had died as a result of a self-inflicted with his "favorite shotgun". 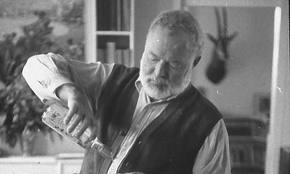 Like so many famous and very talented people Hemingway suffered from many of the pains of over indulgence and too much of a good thing til it trips you up and it brings you down.    His stories of adventure and socializing, most of which seem to be true were what dreams are made of, when your body slowed down and you have to become a "normal" person, can cause the end of a great life.     ;o)
Posted by Bahama Bob's Rumstyles at 9:30 AM No comments: