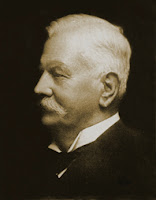 Cockspur Rum was originally founded by Valdemar Hanschell in 1884.    This Danish descendant came to Barbados via the Virgin Islands, where he had worked in the shipping industry.      After settling in Barbados, he founded a ship chandlery that supplied ropes, sails, salt, fresh fruit, meat, and did you have to guess, rum to visiting ships.     The popularity of the Cockspur Rum grew he first took on a partner and became Hanschell Larson, then as the business grew internationally there was a merger that formed Hanschell Inniss.     This company stills blends and bottles Cockspur today in Barbados.

Rum's origins reach back to the 1630's when Dutchman Pieter Blower brought the first sugar cane plants from Brazil.     By the 1640's sugar plantations and factories were growing and molasses (the residue of the Sugar process) was being fermented and distilled into a spirit called "Kill Devil".     This was made in simple pot stills that sprang up next to the wind driven sugar mills and helped make the plantation owners wealthy.     By 1650 over 200,000 gallons of this rum was being produced.     "Rum Bullion" was the first recorded use of the word rum as a name for this kill devil, and an unknown visitor to Barbados shortened the name to "Rum" and the rest is history.

Today in Barbados at the West Indies Rum Distillery the traditions of Hanschell and his partners the rums are fermented, distilled aged and bottled.     Following that tried and true formulas that make these fine heritage rums what they are is how Cockspur has reclaimed their brand and brought it back to the forefront of fine rums.     Several of the members of Rum XP were granted a tour and visitation to witness how Cockspur  is created.     The continuous fermentation, distilling, blending of both light column distilled and heavier pot distilled spirits, and the aging process that has brought Cockspur back to the market as a fine rum.

The warm and friendly visitor's center is a great addition and the store provides the opportunity to purchase and sample some of the products that they are so proud of.   The rest of the story is the addition of  Cockspur VSOR to the line up.     This is a very fine rum that is comparable with many of the finest rums on the market.     Cockspur VSOR, Five Star, and Old Gold are the big three in the Cockspur line and available here in the United States. 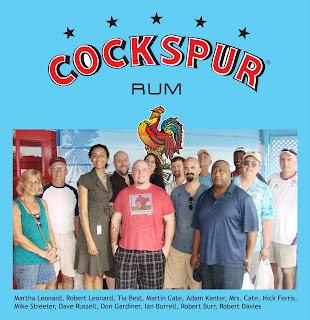 As a member of the Rum XP's and a guest of Cockspur and the West Indies Rum Distillery, I'd like to thank all who were a part of allowing us there for the tour and the tasting of their fine rums.   ;o)
Posted by Bahama Bob's Rumstyles at 10:28 AM 1 comment: