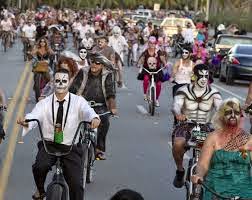 This years event has grown by another 2000 riders over last years event, but I don't see any end to the growth in the near future. Chris and his people at "We Cycle" have done it again .  This has in a very short time become one of the premier events of the Fantasy Fest week here in Key West. 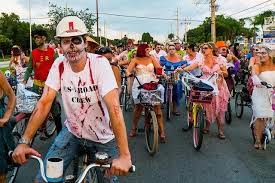 It is a mile or more of zombies on bicycles having a
really fun evening riding, eating and partying.  It is a chance for the young and the old to be involved in a Fantasy Fest event that can be joined  by the entire family. 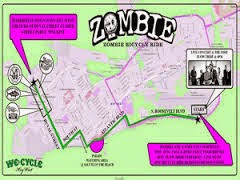 The zombies wound from the East Martello starting point next to the Key West Airport and wound
along the beach to Duval Street where they finished at a street party on the North end of Duval Street.  When it was all said and don, 7000 zombies invaded Key West and the undead took over the town for a "zombie ride" that brought a lot of smiles to the people of Key West.  ;o)

Posted by Bahama Bob's Rumstyles at 6:44 AM No comments: