Football has the Smoltz to Sell Adult Beverages at the Championships

I find this article to be very interesting, in that when the control of the championships is taken away from the NCAA, the profits from sales of adult beverages is allowed and that always leads to higher profits of the organizers.   This is a very interesting article that kind of makes this very clear.


Spectators at the men's basketball Final Four last April at AT&T Stadium in Arlington, Tex., could buy burgers, sodas and even Texas-shaped waffles. But they could not buy alcohol. The N.C.A.A. does not permit alcohol sales - or even its advertising - at the 89 championships it administers.

But on Monday night, about 80,000 fans will flock to the same stadium for the first College Football Playoff title game, between Oregon and Ohio State, and they will be able to select from an array of beer, wine and spirits. They can even order a Cowboyrita, the signature drink at the Dallas Cowboys' home field, made with 100 percent blue agave tequila. Alcohol was also sold at the six bowls affiliated with this season's inaugural playoffs. 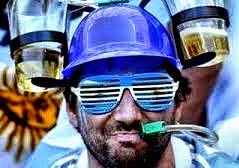 Fans who care to imbibe can thank the powerful Football Bowl Subdivision, the only N.C.A.A.-sanctioned group whose championship is not governed by the N.C.A.A. It therefore essentially gets to play by its own rules. In recent years, the championship was conducted by the Bowl Championship Series, which also permitted the sale of alcohol.

I hope this works out, because it could take some the financial weight of the football program off of the school and allow the playoffs to help support itself.   ;o)
Posted by Bahama Bob's Rumstyles at 7:00 AM No comments: