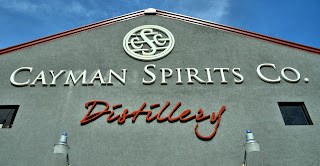 Cayman Spirits Company Distillery is a very interesting operation that has just completed its move into the new facility in the industrial area of Georgetown.   This is a very unusual distillery not only for their methods of creating the rum, but their for aging of the rum. 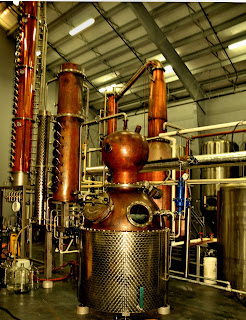 Starting with the fermentation, they start with molasses that is purchased from America, then add locally grown sugar cane pressings to the mix for added flavor.  They preter the blend of sugar cane syrup and molasses rather than just either one of these.   After tasting the distillate fresh off of the still I have to agree.   This one of the most flavorful distillates that I have ever tasted.

These are very modern combination stills.  The wine starts out in a pot still and then to a column still and finally to another pot still / column unit to finish the rum.    The rum is very clean coming from these stills and very flavorful.   The operation is able to produce about 200,000 liters of rum per year.   Part of the production is used for flavored rums like Coconut, Banana, and some others that are currently being perfected.   The rest of the rum is aged in barrels, some in warehouses while the very special rums are aged in seven fathoms of water off the coast of Grand Cayman. 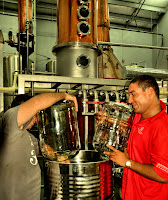 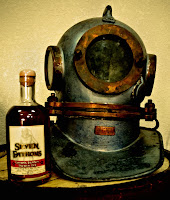 This is the very unusual aging method that makes their "Seven Fathoms" brand of rum so unique.    This is their top of the line rum at this time and has some nice characteristics for such a young rum.    Being able to age the rum under water has many benefits, first the constant motion of the ocean keeps the rum agitating with in the barrel.  This will speed the aging process as well as giving the rum a very consistent flavor.

The distillery also produces a line of rums that are known as "Governor's  Reserve" line of White, Dark, Gold, Spiced, Coconut, and Banana rums.  These are all very young rums that do have very nice characteristics for their young age.

This is the only distillery in the Cayman Islands and a very unique one.   They are showing very creative ideas that are already beginning to show some very  positive results in their products.   I look forward to seeing where they go with these programs.  The Seven Fathoms rum is being imported into the United States, but the rest of their products are strictly being sold in the Cayman Islands.   ;o)
Posted by Bahama Bob's Rumstyles at 7:30 AM No comments: