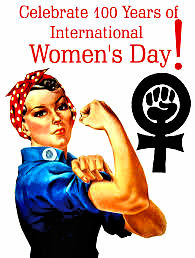 The first women's day was observed in February 1909 when 15,000 women marched through the
streets of New York demanding improved pay, shorter hours and voting rights. The day was mostly celebrated by socialist movements and communist countries in the following decades. In 1975, the United Nations proclaimed the year International Women’s Year and christened March 8 as Women’s Day.

International Women’s Day is March 8th is a global celebration of the social, economic, cultural and political achievements of women. The day is also a call to action through events large and small focusing on equality.  The Day is celebrated with rallies, panel discussions, seminars, networking events and performances.

If you want to know more about the International Women’s Day and some of the events, you can search for your city and country calendrer of events or check on line at  https://www.internationalwomensday.com/Events    For example, in New York, a late afternoon rally at Washington Square Park in Greenwich Village.  In Atlanta, the Women’s Chamber of Commerce will be hosting a luncheon and roundtable on the “state of the woman.” The event will also debut an entrepreneurship initiative for female business owners. San Francisco will host a benefit for female migrant farmworkers showcasing dance music culture.   There will be other events internationally, In London, where thousands attended a #March4Women on Sunday, women’s talents will be showcased with an art exhibit, live music and storytelling in Camden on Thursday. Limerick, Ireland, will host women in film.

Women have come a long way since my college days when you could hear feminine leaders like noted authors like Helen Gurley Brown, Gloria Steinem and athletes like Billie Jean King that were the ones that took the early steps for women’s rights in their own areas.  In the rum world women have risen to the top of that field as well.  There are the women masters of rum like Joy Spence of Appleton Estate, Lorena Vasquez of Ron Zacapa, Jessil Villanueva Quintana of Brugal and Bridget Firtle of Owney’s NYC Rum.  These women have led the way and deserve your respect on this International Woman’s Day.

Posted by Bahama Bob's Rumstyles at 6:13 AM No comments: