Captain Tony Tattacino: Tomorrow is His Birthday and Captain Tony Days are Underway in Key West 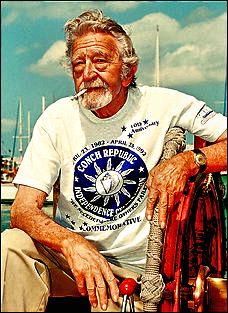 Captain Tony Tarracino born August 10, 1916 in Elizabeth, New Jersey in the midst of the world at war for the first time.   This  ninth grade drop-out who sold whiskey during the Prohibition days with his father, later becoming a gambler that drew the wrath of the New Jersey Mafia, beaten and left for dead at a Newark city dump, waking up some two days later he relocated to Key West in 1948.

Starting his life in Key West as a shrimper, later a charter boat captain, and even a gun runner for the Cuban mercenaries during the Bay of Pigs in Cuba.    1958 was the year that Tony Tarracino bought the rundown bar at 428 Greene Street from David Wolkowski and marked the beginning of Captain Tony's Saloon. 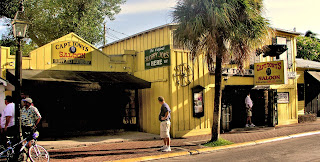 Tony was the father of 13 children that span 50 years from the oldest to the youngest with three wives, Mimi, Mae and Shirley.   When he was 78 in an interview with Tom Archdeacon of the Dayton Daily News, was quoted as saying, "Now truth is , I'd like to make it an even number.   So if you know a healthy girl up there in Dayton."     Tony out lived all three of his wives and one of his sons.    The legendary hustler was said, "I kissed the mothers, not the babies" during his runs for Mayor of Key West.    Mayor of Key West for one term in 1989 after six tries won the seat by 32 votes out of 6,000 votes cast. 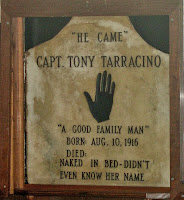 Captain Tony's Saloon has been the starting point for Jimmy Buffett, and the stools bear the names of the famous people like, Shel Silverstein, Muhammad Ali, Dustin Hoffman, Bob Dylan, John Candy, and so many others who came to listen the the salt of the earth philosophy and tales spun by Captain Tony. 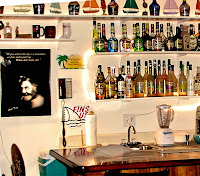 Captain Tony has touched my life from the first time that I walked through the door in the mid 90's and saw him sitting on his stool by the souvenir counter telling tales and signing the breasts of a long line of ladies.  His immortal poster that bears the quote,"All you need in this life is a tremendous sex drive and a great ego.  Brains don't mean shit".   The poster hung in my bar in North Carolina until I moved to Key West to live my current life on the boat.   The man, the legend, and the family man are all covered in the book"Life Lessons of a Legend" by Captain Tony Tarracino and Brad Manard.   His spirit still flies over Key West daily in the form of his image on the side of the Cape Air plane that leaves Key West daily for Fort Myers and returns.

This week we celebrate Captain Tony's life and tales during Captain Tony Days here in Key West.   Happy Birthday Captain Tony, where ever you may be today.    He was quoted when asked about where he thought he would be going, "Truth is, when that angel finally does appear and says 'Hey Tony what'll it be - heaven or hell? I'm gonna ask, How 'bout Vegas instead?"    I guess that really says a lot about the man and the legend, and how his mind worked.  We truly miss him here in Key West since his passing on 1 November 2008, the day after the end of Fantasyfest.    ;o)
Posted by Bahama Bob's Rumstyles at 9:32 AM No comments: