National Rum Day: A Day to Celebrate the Spirits of the Sugar Cane 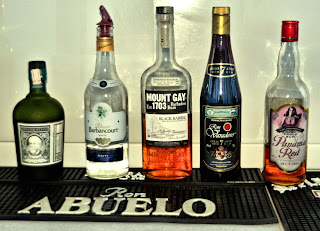 August 16th is National Rum Day here in America, giving us a chance to celebrate and enjoy the wonderful varieties of rums available to us today.   My question is where did National Rum Day start.   That seems to be the question of the day.  So far I have not found a rum company marketing firm or anyone else who claims responsibility for its origin, nor does any one else claim it to be their idea.  This seems to be the consensus of many of the rum writers around.   I guess it is like rum, no one really knows where it started, other than being a spin off of the sugar production wastes in the late 1600's and early 1700's.   Unlike any other spirit, rum has a very colorful and romantic high seas history, it is a spirit that has matured with age and has become a very big part of the main line spirits of today.

Wayne Curtis in his book, "And a Bottle of Rum, A History of the New World in Ten Cocktails", Wayne takes you through the history of the new world and how rum was right there in the middle of it.   "Curtis takes us from the taverns of the American colonies, where rum delivered both a cheap wallop and cash for the Revolution, to the plundering pirate ships off the coast of Central America, to the watering holes of pre-Castro Cuba, and to the kitsch-laden tiki bars of 1950s America. Here are sugar barons and their armies conquering the Caribbean, Paul Revere stopping for a nip during his famous ride, Prohibitionists marching against “demon rum,” Hemingway fattening his liver with Havana daiquiris, and today’s bartenders reviving old favorites like Planter’s Punch. In an age of micro brewed beer and single-malt whiskeys, rum—once the swill of the common man—has found its way into the tasting rooms of the most discriminating drinkers."

Rum has had a profound effect on America, both as the bottom feeder liquor of post Prohibition America where bar owners were forced to by it in order to get the more desirable whiskeys.  This practice lead to the development of many of the staple cocktails that we still drink today.  Today rum enjoys its position as one of the premium spirits of our time.  With sales of rums growing faster than any other category, the addition of more premium and ultra premium rums ever year, this day's dedication to rum is very well deserved.  Enjoy your National Rum Day with your very special favorite rum served just the way you like it.  'o)


Posted by Bahama Bob's Rumstyles at 8:11 AM No comments: