Counting Up All the Ways America's Booze Laws are Terrible.

I ran across this article this morning and though you might find it very interesting.  It really shows the need for a set of  uniform alcohol laws in this country.  It is no wonder that many of the finest spirits in the world choose not to bring them to America. 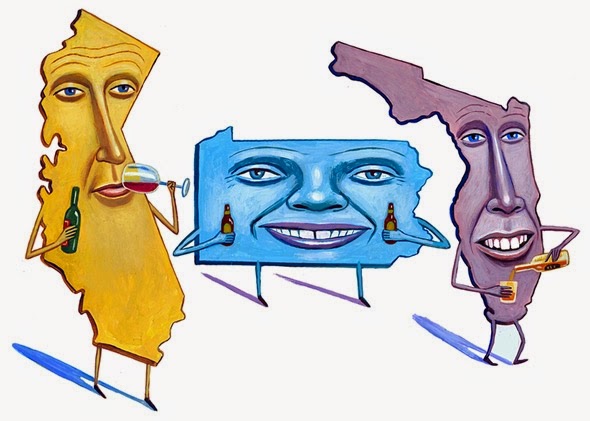 
Last week in Slate, Alison Griswold highlighted a costly hurdle for would-be bar owners in Boston. The liquor licensing system in Massachusetts places population-based caps on the number of licenses available in a municipality, forcing restaurant and bar owners to look for liquor licenses on the secondary market, where they cost as much as $450,000.


When I read about the quota system in Massachusetts-the state I was born in-I immediately thought of the similar systems in New Jersey and Pennsylvania, the states where I grew up and currently live, respectively. While $450,000 for liquor is no Citywide Special, it would be considered a bargain in some parts of Jersey, where licenses have sold for $1.6 million. Pennsylvania is comparatively cheap: Lucky buyers can find licenses in the Philly burbs for just $200,000.


So are liquor license quotas common, or are they only common in states where I've happened to live? Apparently, no one has bothered to look this up before, so I reviewed the liquor laws in all 50 states. After a few hours of thrilling statutory parsing, I had my answer to which states had quotas: Alaska, Arizona, California, Florida, Idaho, Kentucky, Massachusetts, Michigan, Minnesota, Montana, New Jersey, New Mexico, Ohio, Pennsylvania, South Dakota, Utah, and Washington. (Certain neighborhoods in D.C. have a moratorium on the issuance of new licenses, too, if you want to pretend that D.C. is a real state.)


In most of these quota states, a locality's population limits the number of available licenses there. In New Jersey, the cap is one license per 3,000 municipal residents, and in Massachusetts, it's one license per 2,000. Utah probably has the strictest system, with a quota of one license per 4,925 residents.


In Utah, licenses are expected to go for about $1 million on the newly legalized secondary market, which is about how much liquor licenses already cost in New Mexico and Montana. Meanwhile, in nonquota states, liquor licenses cost a few hundred dollars in registration fees.
Read more at http://www.slate.com/articles/business/moneybox/2014/06/america_s_booze_laws_worse_than_you_thought.html
Posted by Bahama Bob's Rumstyles at 7:42 AM No comments: