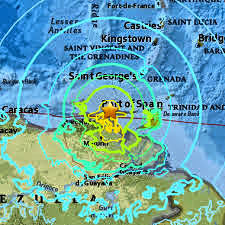 The University of the West Indies Seismic Research Center reported that there were at least seven aftershocks from the earthquake, about one every three minutes. The quake was measured at a magnitude of 6.9 in Trinidad and lasted 90 seconds, seismic specialists said. They also noted that it was one of the strongest earthquakes to hit the country since 1968.
“Based on the observations so far, Trinidad suffered minor damages,” Illias Papadopoulos, a seismologist at the University of the West Indies Seismic Research Center told the Miami Herald. “It should be noted, though, that the information collected over the years indicates that this is not the biggest possible event we expect in the vicinity of Trinidad & Tobago.
“Historically, we have evidence of even larger events, which are expected to cause higher levels of ground shaking, and consequently more damage. ‘’
The Trinidad Express reported that the country was “stunned” by the quake as residents fled their homes.
“That was so scary,” Vaughn Ramdeen, who lives in Arima, Trinidad, tweeted. “Couldn’t do anything but remain in one spot. Still trembling. The house was shaking like crazy. We ran out. Thankfully there are no power lines so didn’t have to worry about anything falling on us. It lasted about a minute.”
Electricity and telephone outages were reported in some parts of Port-of-Spain, Trinidad and Tobago’s capital. Videos circulating on social media showed groceries falling off store shelves, buildings with cracks, and a piece of a mountain in Chaguaramas along Trinidad’s northwest peninsula falling into the ocean.
There were no immediate reports of casualties as the country waited to hear back from disaster and preparedness workers who fanned out across the country to provide a report.
Read More at https://www.miamiherald.com/news/nation-world/world/americas/venezuela/article217103030.html
Hoping that things are alright for our friends at the House of Angostura in Trinidad and at DUSA and Sana Teresa Distilleries in Venezuela.  Earthquakes of that magnitude can lead to finding many buildings unusable, the long term damage is rarely seen at first.  Best wishes for your safety.

Posted by Bahama Bob's Rumstyles at 5:01 AM No comments: