Rum Renaissance is at Full Swing

Yesterday was the first of three non-stop days.     We started the day off with a breakfast with our friends at Atlantico.     Then it was off to the first round of rum judging of the day.    Lunch was next on the agenda with our friends from the Koloa Rum Company from Kauai Hawaii.     Bet you cant guess what was next, ya back for the second round of rum judging.     After being given enough time to shower and change, we were on a bus headed for the Tobacco Road in Miami and the Zafra VIP Party.    Finally it was off the the Bacardi Penthouse in Coral Gables for the Bacardi VIP Party and a surprise tasting of some new Bacardi products.

The breakfast with the Atlantico people was a chance to provide them with some feedback on a couple of new products that they are working on.    This is a real honor for all of us at the Rum XP's, it isn't often that you are given the opportunity to be apart of who a product is going to be made.    After a nice breakfast and the tasting it was off to the judging room again for the second of the five judging sessions.

Koloa Rum Company of Hawaii was the host for our lunch.    Bob Gunter, president of Koloa Rum Company talked to us about the history and linage of the company.     He told of the high quality sugar cane the rich volcanic soil and very rainy climate there provides.    Distribution is the stumbling point for those of us on the East coast, but there is distribution in California, which is a start for bringing these rums to Florida.     After a nice lunch and a chance to spend some time with Mr. Gunter, we were back in the judging room again for the second of this days judging sessions.

It's now 5:00 pm and we are aboard the bus heading for Tobacco Road, the holder of Miami's oldest liquor licence and the Zafta Party.    Francisco "Don Pancho" Fernandez, the master distiller behind the creation of this fine rum was the host of the party.    Don Pancho was instrumental in the creation of many rums while he was at Abuelo and Havana Club before forming the Zafra Brand.    The party was a great on with a chance to get together and relax and enjoy the Zafra Rum our host provided us.    The crowd grew and the music had everyone groovin to the tunes and rum.     After a few hours at Tobacco Road with Zafra it was time to thank Don Pancho, our host and the personnel that had made  this part of the evening so enjoyable.     Then back on the bus and get underway to the Bacardi Penthouse in Coral Gables.

The Bacardi VIP Party was a very elegant affair that was  made even more important to all of us when the XP's were invited into the tasting room to preview and judge some new Bacardi products against some their competitor.      This is a real honor when a company like Bacardi has this kind of trust and faith in this group of rum people.      The tasting was interesting and very enlightening, and I know that I'd like to be apart of more of these events in the future.     The evening gave me a chance to enjoy one of my favorite Bacardi Rums, Ron Solera that is made in Mexico and not easily found in Florida.    Combined with the historic memorabilia in the penthouse, the fine food and drink I was honored to meet and get to talk with Mr. Bacardi during the evening. 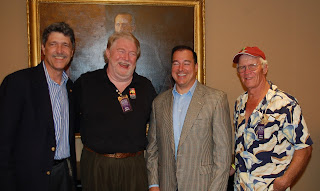 With the conclusion of the Bacardi Party it was back on the bus to the Deauville and some much needed sleep.   Today is a similar schedule so I've got to get the the Plantation Breakfast before I'm late  ;o)

Posted by Bahama Bob's Rumstyles at 9:06 AM No comments: