Drinking and the Opinions of Others?

I find it very interesting all of the quips and quotes form different people and their feelings about the use of alcohol.     Many of the well known personalities from many different ages seem to have very differing opinions about the enjoyment of the fine spirits.

Hemingway for instance, a man that brings up the vision of bar room brawls, record breaking daiquiri consumption, has many interesting quotes of drinking.
"Always do sober what you said you'd do drunk.  That will teach you to keep your mouth shut", probably one of his most famous,but "Write drunk; edit sober." strikes close to home with me.   Oscar Wilde has been quoted as saying "Work is the curse of the drinking class".    Lets not forget Mark Twin, who's famous remark "too much of anything is bad, but too much champagne is just right".    George Bernard Shaw is quoted "alcohol is a very necessary article.  It enables Parliament to do things at eleven at night that no sane person would do at eleven in the morning."        So much for the authors, let us look at some others.

Dean Martin and the rest of the rat pack also were "loaded" with many interesting quotes as well.  Dean Martin said" If you drink don't drive, don't even putt", and at another occasion said" I once shook Pat Boone's hand and my whole right side sobered up".   Frank Sinatra's philosophy on the subject says  "I feel sorry for people who don't drink.  When they wake up in the morning, that's as good as they're going to feel all day".  He also believes "Basically, I'm for anything that gets you through the night - be it prayer, tranquilizers, or a bottle of Jack Daniels."     Humphrey Bogart felt "The problem with the world is that everyone is one drink behind".   One old guy George Burns believed that "It only takes me one drink to get drunk.  The trouble is, I can't remember if it's the thirteenth or fourteenth."

Probably the most quoted man on the subject of drinking was W. C. Fields, his quotes are still repeated nearly a century later, and still just as relevant.   His funny lines on the subject include, "Thou shalt not covet thy neighbor's house unless they have a well-stocked bar." comes to my mind.   He also talks of " A woman drove me to drink and I never had the courtesy to thank her."   I think my favorite is "Everyone must believe in something. I believe I'll have another drink."  His humor alone with that of so many others of the teens through the forties years used drink as a very crucial part of the show. 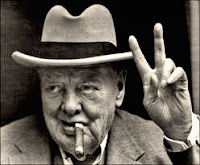 Even many politicians and others have been quoted on the subject of liquor, Winston Churchill  was quoted as saying "I may be drunk Miss, but in the morning I will be sober and you will still be ugly".     There are few areas or people that haven't had some opinion of the use of alcohol, but the quotes are always great entertainment.   ;o)
Posted by Bahama Bob's Rumstyles at 11:21 AM No comments: