All of the debate over the sugar and all of the other things being added to rum lately might ultimately hurt the category in the long run.   Wine has gone through this issue and caused a huge rift that lead to the German wine industry being seriously harmed.

Rum is not alone in this issue, Whiskey, Vodka, and Others are going through similar issues as well.  In order  to sustain growth many spirits are adding flavored and sweetened expressions to add to their bottom sales line.  "The flavors have their own advertising and activation efforts, but many producers are looking to promote them together, especially since the flavors bring in younger consumers and women.
As the world’s number-one bourbon, we’re honored to be named a Growth Brand and continue to deliver strong growth across our portfolio through our flavored offerings, premium expressions and Jim Beam White Label, which continues to gain momentum,” says Vanessa Jenkins, of Beam Suntory.   The key is that they are spending time and effort in introducing new blended and premium expressions instead of putting so much time into the flavored expressions.

All of the debate and issues in the rum category need to be addressed by a council of producers and figure a way to let the customers know what is what and let them make their own decision that fits their palate.  I don't think that the Rum producers are willing to give up the portion of their customers that like sweet and flavored expressions.  Doing so would hurt the entire category and bring on a rapid loss of sales.   There is a place for all of these expressions in all categories, but you just got to let people know what they are buying and tasting.

Here is a chart of the fastest growing expressions across the spirit world and a good number of them are flavored or sweetened expressions. 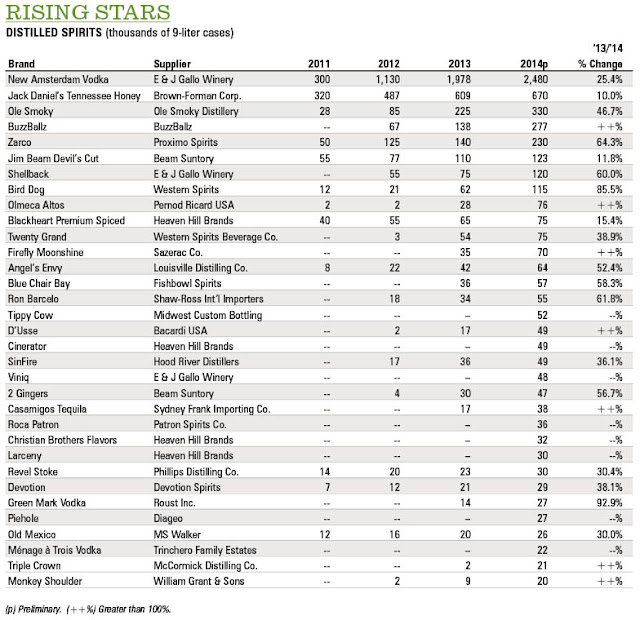 Another issue comes with the expressions that are adding so much flavoring the they have gotten to a very low alcohol content.  Some people want to call them "liqueur", but potency is not an issue with liqueurs.   In general, liqueurs are sweetened spirits with various flavors, oils, and extracts. Liqueur's alcohol content can range from a low 15 percent to 55 percent alcohol, so potency is not the distinguishing factor.   Rum, whiskey, and other liquors can serve as a base spirit for liqueurs.    In days gone by, liqueurs were referred to as "cordials" and they were often used as flavorings for cocktails or medicinally.    Liquor is an alcoholic beverage made of grains or other botanical sugar bearing plants which is fermented and distilled into a potent drink.

This is an issue that is not just a rum issue, but it is a serious one for the rum producers and an issue that needs to be settled soon before it buries the category.

Posted by Bahama Bob's Rumstyles at 5:23 AM No comments: