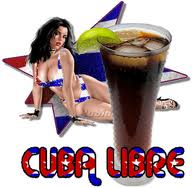 The Cuba Libre's origin is as varied as many other cocktails of the period, but the one sure thing is that was originally concocted by U.S. Soldiers while in Cuba.     There are stories if the cocktail appearing in 1898 at a party to celebrate the Independence of Cuba from Spain.    "Cuba Libre" was the battle cry of the Cuban Liberation Army during the Cuban War for Independence that ended in 1898 The story of the off duty soldiers in 1898 has some holes in it being that there was no Coca-Cola in Cuba until 1900.     According to a deposition by Fausto Rodriguez, it wasn't until August of 1900 that the Cuba-Libre was first mixed in a Havana bar.     The story has it that a member of the U.S. Signal Corps was the first to mix the cocktail, and he is only known as "John Doe".    It seems that only Cuba has the real story of how this cocktail emerged into the populous. 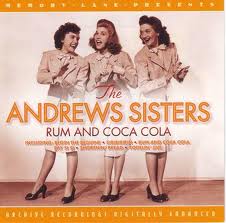 It took the "Tiki Pop Culture" growth in the United States for the popularity of the cocktail to really take off.     In 1945, the Andrews Sisters recorded a song named for in ingredients that made up the cocktail.     "Rum and Coca-Cola" as a song and as a cocktail swept the country.    Both of the ingredients is the post -war era were cheap and this didn't hurt the growth in popularity of the cocktail.     Today this is still one of the more popular cocktails here in America.

Cuba Libre
Place all ingredients in a "Collins glass" with ice and garnish with a lime.

If you talk to the Bacardi folks, it was originated with "Bacardi Gold Rum", if you talk to the Havana Club , it was made with "Havana Club Light Rum", thus the mystery  continues.    Like all good cocktails everyone wants to be the originator, and as a result the story becomes so murky that the truth will probably will never be known. 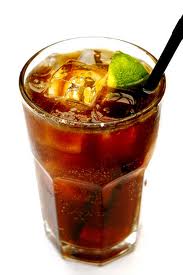 Mix all the ingredients in a "Collins glass" and garnish with the lime wedge.

No matter what you call it or how you mix it, this is one of the true classic cocktails and a great "go to" cocktail for anyone wanting a refreshing drink.     ;o)

Posted by Bahama Bob's Rumstyles at 9:41 AM No comments: