The Spirit that Carried Colonial America to a Revolution

Sugar culture in the Americas in turn began with Columbus who brought sugar cane to the Caribbean in 1493. where, it flourished.  The popular and profitable sugar refineries had two major problems: rats and molasses. Rats, whose sweet teeth could do in up to 5 percent of a given sugar crop per year, were variously dealt with by poison, ferrets, dogs, and slaves armed with clubs.   Molasses, though less damaging, was messier. It was a by-product of the sugar-making process: the boiled cane syrup was cooled and cured in clay pots with drainage holes in the bottom; as the syrup crystallized to form sugar, the leftovers–in the form of dark, caramelized goo that oozed out of the holes.


On average, about one pound of molasses was made for every two pounds of sugar, and nobody knew what to do with it. Some was fed to slaves and livestock; some was mixed with lime and horsehair to make mortar; and some was used to concoct a very ineffective treatment for syphilis. Most, however, to the tune of millions of gallons a year, was simply tossed into the sea.     No one knows who first noticed that molasses could be fermented to generate alcohol, but the breakthrough may have occurred on Barbados, a tiny pear-shaped island at the tail end of the Lesser Antilles. There, in 1647, a chatty visitor named Richard Ligon attended a party at which he was treated to a feast that included suckling pig, pineapple, and a throat-searing drink known as “kill-devil,” an early moniker for rum.   Though undeniably alcoholic, “Kill Devil” doesn’t seem to have been tasty, even the perennially upbeat Ligon describes it as “not very pleasant.”   More forthright critics called it “rough and disagreeable” or “hot, hellish, and terrible.” Nevertheless, it sold like hotcakes.


Pirates, traditionally, accounted for a lot of it; excavations at Port Royal, Jamaica, a famous pirate hideaway  that was once dubbed “the wickedest city in the world”, turned up hundreds of rum bottles.   Even more was sold to the North American colonies. In 1699, a British observer commented that rum was “much loved by the American English” as “the Comforter of their Souls, the Preserver of their Bodies, the Remover of their Cares, and Promoter of their Mirth.” It was also a sovereign remedy, he added, for “Grumbling of the Guts” and chilblains.      By the early 18th century, nearly all the rum exported from the West Indies went straight to North America, between 1726 and 1730, Barbados and Antigua alone shipped out over 900,000 gallons.    American colonists were not only importing rum; they were distilling their own.  As of 1770, there were over 150 rum distilleries in New England, and the colonists, collectively, were importing 6.5 million gallons of West Indian molasses, and turning it into five million gallons of rum. One estimate from the time of the Revolutionary War puts American rum consumption at nearly four gallons per person per year. Unfortunately, most of it wasn’t very good, but it did have the advantage of being cheap.
The Molasses Act of 1763 had called for a tax of sixpence per gallon on non-British sugar and molasses imported into the North American colonies. This measure had been proposed by sugar growers in the British West Indies who wanted Parliament’s assistance to force the colonies to buy their produce, not the less expensive sugar of the competing Spanish and French islands. The sixpence tax was high and, if strictly enforced, would have caused severe hardship for the New England distilleries. Rum was a great social lubricant of the day and was much in demand throughout the colonies, but heavy taxation could put the beverage out of the reach of many in the lower reaches of society.  The problem with this Sugar Act was they could not really enforce it.  The colonists were smuggling the non-British molasses into the country.  Later, the Sugar Act of 1764 was passed.   The ever-frugal New Englanders worked their way around the tax by bribing customs officials.   British enforcement officers were aware of what was happening, but followed the “salutary neglect" of the colonies. Merchants on both sides of the Atlantic were prospering, so why rock the boat? 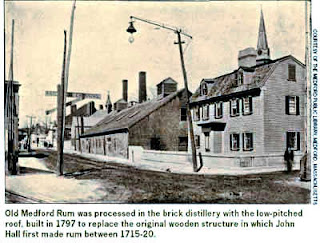 It would be these kind of taxes that would eventually lead the colonies to war with the British.  Even the start of the war began with rum.  Did you know that during his ride Revere made a little pit stop in Medford, Massachusetts at the home of Captain Isaac Hall. Captain Hall happened to be a distiller of rum, and Medford happened to be the rum capital of America at the time. Being a good host, Captain Hall started pouring flagons of rum, and the rest, as they say, is history.   By the time Revere saddled up again, he’d "sampled his fair share" of Captain Hall’s hospitality and “he who came a silent horseman, departed a virile and vociferous crusader, with a cry of defiance and not of fear.” Not surprisingly, Revere was “pulled over” by the authorities (Redcoats) and detained for an hour before being released.
Posted by Bahama Bob's Rumstyles at 5:33 AM No comments: