Drinks to Avoid for Your First Impression 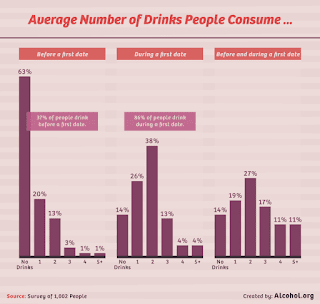 I ran across an article about drinks that you don't want to drink on your first date, but it also
applies to your first time drinking with people you have just met.  I see so many people that go on a company picnic or get together with co-workers for the first time and head straight off "power drinking" and end up in a heap on the ground or just make a complete fool of themselves.  No one is impressed with that at anytime, but if this is who you introduce yourself as, it is really remembered.

When it comes to cocktails, a new survey from Alcohol.org showed that the worst thing you could order is Vodka and Red Bull, (30 percent of respondents) according to women, while men say it’s a Sex on the Beach (35 percent).  Wine was considered the best drink to order on a first date, according to 47 percent of surveyed Americans, followed by beer and a Margarita.   The survey also identified the 20 most popular alcoholic drinks, with beer taking the top spot, as well as which common drinks are considered upscale . Champagne and wine topped the list as the most classy drinks, while Vodka Red Bull and beer were considered the least classy.

This is something to keep in mind as you head out on your first date or get together's with new friends.  Your first impression is a lasting one and you don't want to leave them with the impression of you laying on the ground passed out or having to leave your car behind because you had too much to drink,  That is not a bad idea if you do, but its not the first impression you want people to have of you.

Read more about this subject at https://www.alcohol.org/guides/drinking-on-dates/

Posted by Bahama Bob's Rumstyles at 5:14 AM No comments: