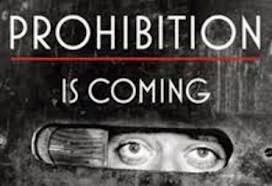 This morning I found an article in the Fayetetville Observer that I found very interesting and would like to share with you.    It deals with the government shut down and "non-essential" government functions.   I too if they are really "non-essential" why is our government wasting the hard earned tax payer's dollars on it.   In this particular case alcohol research.
Prohibition was repealed on the 5th of December, 1933, and there is still way too much money being spent to further limit the free choice of the people of the United States.   It is illegal to serve alcohol to minors or persons with known alcohol addiction, in addition it is illegal to drive a vehicle with a blood alcohol level over.08%.  That pretty much covers the subject.

Op-ed: Anti-alcohol research should be cut


During sequestration, thousands of nonessential government workers have been told not to show up for work. My question is, why should government be doing anything nonessential in the first place?


I can think of a million nonessential things that government should stop doing, but let me focus on one.


Eighty years after the end of Prohibition, the government hires scores to "scientists" to study whether there should be restrictions on drinking. Despite the scientific language of their arguments, much of their arguments are driven by a moralistic set of assumptions against alcohol. (Let us put aside, for the moment, that Jesus' first miracle was turning water into wine.)


Take, for example, the "Cost of Alcohol" study recently developed by the Centers for Disease Control and Prevention. Such studies routinely make fanciful claims about how alcohol is bad and costs the economy an astronomical $220 billion. Their estimates include not just the cost of problem drinkers but how drinking decreases productivity. (Let us put aside, for the moment, that my research of 10,000 Americans found that drinkers earn 10 to 14 percent more money than otherwise similar nondrinkers.) Their studies are usually accompanied by proposals to tax, regulate and restrict alcohol.


As an economist, the methodological flaws in the CDC estimates have often surprised me, and I have long wondered why government agencies could fund such bad research.


But, then I came across a statement published by Thomas Babor, a well-known practitioner within the public-health industry. In Babor's own words, "In a democracy, politicians and policymakers often need to be shamed into doing the right thing, and costs to society have the ability to shame, blame and even defame."


Every once in a while, true motivation is revealed. Concerns for accuracy and proper methodology are secondary. The cost of alcohol estimates are not designed to be accurate - they are designed to "shame, blame and defame."


Babor and other advocates are deciding for us what the "right thing" is, and science to them is not a factor. Far from being analytically valid, societal cost of alcohol estimates are really just lobbying numbers. One would think the CDC would have better things to do with scarce resources. Every dollar spent on "cost of anything" studies by the CDC is a dollar taken from taxpayers or a dollar that adds to the trillions of dollars of government debt.
You can read more at http://www.fayobserver.com/articles/2013/07/21/1270479   .
I think if some thought was given to this kind of waste by our government officials a lot of the problems that we are facing right now would be reduced.     Government of the people and by the people is a great thing, but "government manipulating the people" is a "train wreck".
Posted by Bahama Bob's Rumstyles at 7:46 AM No comments: