Where Did Hemingway's Drink in Havana Part 3

Papa's favorite watering hole seemed to be the El Floridita with his old friend Constante Ribalaigua, owner and head barman.     Located at the corner of Obispo and Monserrate Streets, the only location since it was opened in 1817 as the "La Pina de Plata" (the Silver Pineapple).     Nearly 100 years later, a number of North American tourists persuaded the owner to change the name to El Florida, but with time it became known as "El Floridita". 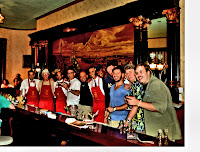 In 1914, Constante began working at El Floridita as a barman, and in 1917, he became the owner.    Constante is credited with creating the frozen daiquiri, and many other fruit and rum cocktails.   The motto on the refrigerators tells the story "La Cuna del Daiquiri" (The Cradle of the Daiquiri).   The highly prized traditions of the early bartenders are still present today when Alex and his staff prepare the cocktails for you.

There are a number of very fine daiquiris that are made to the exacting standards of Constante, but few can match the flavor and quality of the "Papa Dobles" or Papa's Double.    This simply means that there is twice the rum and the sugar is left out.  Papa felt that if he drank 14 to 16 of these a night, which he was known to do, he would get sick from all of the sugar.   Papa would sit in the corner virtually every time, and enjoy his daiquiri until it was time to go home. 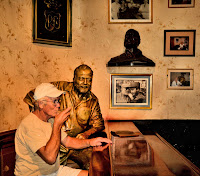 To this day, you can have a cocktail with the statue of Ernest where his favorite seat was located.   His wooden bar stool that he occupied can be seen in his house, Finca de Vigia in the city of San Francisco de Paula.   It was a pleasure for me to be able to sit and share some time with his image over in the corner.   It gives you a feeling that he still might be around somewhere in the building.    His spirit of fun is definitely around.

I feel like that El Floridita was my personal favorite bar that we attended in Havana, and I can really feel the vibe that drew Papa to the place so regularly as well.    The place has some kind of magic about it, the fun just doesn't ever end while you are there.

The group of us went to the grave site of Constante Ribalaigua and mixed up a batch of Hemingway Daiquiris and toasted the genius of Cuba most famous barman.    This was a very moving moment for all of us that were involved. 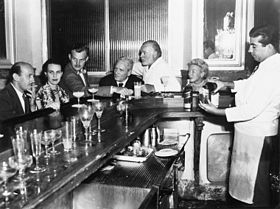 This is the last of the series of three article about Hemingway's watering holes in Havana, but the ones that he did frequent were some of the best Havana had to offer.    He hung out in all of the fun places and did a great job of having so many of his famous friends to hang out with him there in Havana.   People like Spencer Tracy, Ava Gardner, Clark Gable, just to mention a few, could be found  in his company almost any time.   These are places that you need to visit if you find yourself in Havana at some future time.    All of them will leave an indelible impression with you.   ;o)

Posted by Bahama Bob's Rumstyles at 8:21 AM No comments: