A WORD about HIGH ESTER (Flavored) Rums - the Cousins Process


Richard Seale is one of the foremost rum producers in the world and I found this post on the effect oa high esters to be very enlightening and well worth making available to all of you that are interested in this type of rum.


During my impromptu meeting with Carsten E. Vlierboom of E&A Scheer recently in Miami, I expressed dismay at the recent independent bottling of the 1,600 ester DOK marque. Matt Pietrek who has been researching Jamaica Rum extensively of recent has also in his quiet manner explained that these marques are not for drinking.

In the 19th century, Jamaica Rum was exported in great quantities to the UK and the European continent, Germany in particular. In 1889 Germany dramatically increased the import duty on Jamaican Rum and severely reduced this trade. The clever Jamaicans responded by creating a class of “Flavored Rum” (meaning for flavoring) which could create a blended rum to compete against the local spirits (subject only to nominal excise taxes).

McFarlane (1947) classified Jamaica Rum into four categories - common clean, plummer, wedderburn and flavored. The first three were up to 300 esters (g/hl AA). The flavored category was 700 to 1,600. Now by esters, we mean ethyl acetate, the simplest of all esters. The others are not included in the count.

At the 1908 Royal Commission on Potable Spirits, J C Nolan, special commissioner of the Jamaican Government to the UK, made it quite clear the purpose of the flavored rums.  “It is a flavoring essence. It is not a self rum”.   “No, you could not drink it as a self rum”
In theory you can make these high ester rums in the normal way by extending the fermentation long enough. The longer the fermentation the more acids by bacteria are produced. The acids react with the alcohol to produce the esters. More acids, more esters. However, this starts to get very impractical and this will leave a very poor yield of alcohol in the ‘wash’ to distill.
To solve this problem, the brilliant Jamaican chemist HH Cousins developed a process to boost the ester count in rums in a more economical way. 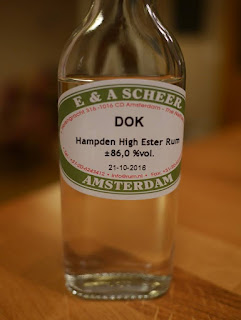 The ‘lees’ in the retort at the end of distillation retains a considerable amount of the acids from the fermentation. Volatile enough to make it to (and concentrate in) the retort, not volatile enough to make it to the rum. The acids are recovered by adding lime (calcium oxide) to the lees to produce the calcium salts of the acids. This concentrated acid mixture after precipitation of calcium sulphate (by adding sulphuric acid) is added to high strength rum (i.e. lots of alcohol) and placed in the high wines retort where the esterification process (alcohol + acid) takes place. The resulting distillate is now supercharged with esters - up to 7,000 - and this distillate is used to ‘top up’ the rums produced in the normal way to reach the levels such as DOK at 1,600.

Gentlemen bottlers please, the Jamaicans are laughing at you, Mr. Nolan and the Hon. HH Cousins are spinning in their grave. DOK and similar marques are flavoring essences, not for drinking. They are produced by a process adjunct to distillation.  Pungency is not quality.

I know it has become fashionable in certain circles to marvel at flavor, any flavor. The burnt tires and excess fusel oil of the likes of Caroni for example (bad fermentation and bad distillation produces this).  It would well be advised to listen to the advice of HH Cousins:  “An increase in the ethyl acetate content of a rum…, if not supported by an increase in the other esters in suitable proportion will not add to its intrinsic value.”  “…there are certain “marks of rum (and among then some of stout body and attractive quality) which are as low as 100 esters”

The measure of ethyl acetate was as important to the regulation and control of Jamaican Rum as was a measure of alcoholic strength. It was not a mark of quality.  And it is well worth noting that esters are formed during ageing. And these esters are the more complex esters with very attractive aromas. For most aged spirits, these are the most important contributors to the flavor.
Jamaican Rums are certainly very remarkable for their ester content. A tradition we can still enjoy today. It is wise though to understand the differences.

Posted by Bahama Bob's Rumstyles at 5:27 AM No comments: