During his days in Key West, fishing the Gulf Stream between Cuba and Key West is where Hemingway spent a great deal of time.  Along with his friend Josey Russell and others, he learned the ins and outs of fishing very successfully along the Gulf Stream.  The Ernest Hemingway "Mob" would all get together for fishing expeditions to the Marquesas and the Dry Tortugas on Josey Russell's fishing yacht "Anita".

Hemingway took his first sport fishing foray with his friend Charles Thompson, native and owner of a hardware store who loved fishing and hunting.   Going to the Marquesas, some 25 miles to the west of Key West. Ernest was ecstatic — he was finally fishing for sailfish, swordfish, tarpon, and marlin in the Gulf Stream. They fished by day, dined on fresh fish and conch by night.
﻿
Finally in 1934, Ernest Hemingway stopped off in New York to take a few meetings, after which he promptly went to Coney Island to visit the Wheeler Shipyard and make a down payment for his customized yacht.   Hemingway required modifications to the 38-foot vessel.  He added a live fish well and a wooden roller spanning the transom to aid in hauling fish aboard. He also requested extra large fuel tanks so he could stay at sea for longer periods of time. The boat had two motors - a 75hp for traveling and a 40hp for trolling.  And he requested a flying bridge.  The finished yacht cost $7500 and was brought to Key West and christened Pilar, a nickname for his wife Pauline.

After his break-up with Pauline, Hemingway took his boat and moved to Havana and into the Ambros Mundos Hotel.  Pilar would have a new home in Cojimar, a small fishing village to the northeast of Havana.   There along with his friend and Captain Gregorio Fuentes, they would terrorize the fish between the Dry Tortugas, Cuba, Florida and the Bahamas.  Fuentes would captain Pilar until Hemingway left Cuba in 1960, and would finally pass away in Cojimar on July 13, 2002 at the age of 104. Their adventures together on Pilar were the inspiration for Hemingway's Old Man and the Sea. 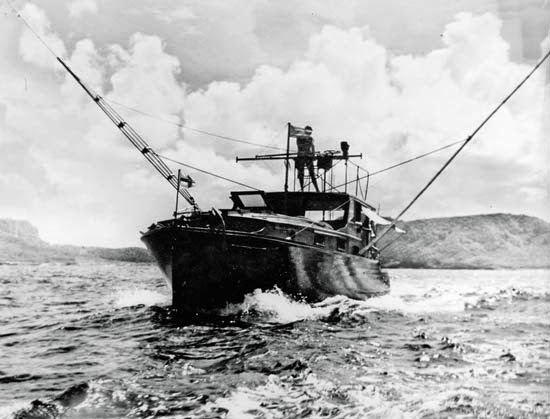 At the start of World War II, Hemingway volunteered for patrol off of Cuba looking for Nazi U-Boats.  In 1942 and ‘43, Roosevelt asked for volunteers to patrol off the Atlantic and Gulf coasts—as many as a thousand boats were assigned. The United States didn’t have enough Navy ships to cover these areas. The volunteers became known as the Hooligan Navy.


Hemingway was the only American civilian to patrol off of Cuba, where he was living at the time, and he had to get through a lot of red tape. But he was part of a huge surveillance network in place. You just never knew when the subs were going to come up. When ships in the Hooligan Navy spotted U-boats, they’d call for backup from the military.

In May of 1960 just before Hemingway's final departure from Havana, he would receive a fishing award from Fidel Castro.   He left Cuba for the last time in July of 1960.  His beloved fishing yacht, Pilar has been restored for a second time and is on display at Finca la Vigia in San Francisco de Paula, just outside of Havana.
Posted by Bahama Bob's Rumstyles at 7:00 AM No comments: