Florida Manatees and Their Recovery

The Florida Manatee has been on the endangered species list for years, but one of the highest counts of the manatee happened in January of 2010.    At that time there were approximately 5076 of the mammals counted by aerial survey.     Changing weather and manatee behavior are problems for the people that are trying to determine the exact population of these unique mammals.   Though they have few natural enemies, cold temperatures, hurricanes, and red tide poisoning are their greatest threats.     Though these wonderful creatures normally will live for several decades, they seem to be most threatened by the collision with water craft.

Conservation efforts to protect include manatee area speed zones and the protection of the sea grass areas.     There is also a program of sea grass restoration under way in several areas in Florida that will help the specie survive.     Pollution of the water that kills the vegetation that the manatee's depend on is another factor that controls the population.

A couple of weeks ago while having lunch at the Hurricane Hole Marina, a pair of Florida Manatee's appeared in the middle of the boat basin.    The pair were snuggling and cooing, obviously in love, in the shallow warm water of the basin.    It seems that an adult manatee female will have one calf approximately every three years.   This is a factor in the growth of the population too. 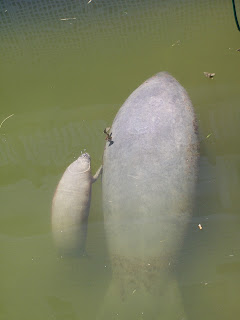 These very special mammals deserve our efforts to preserve the population and a few extra minutes of our time while operating a watercraft in the areas where they feed and live.    I for one would like to have future generations get the opportunity to see these marvelous creatures like I've had the opportunity to.    To see a pristine Florida Manatee and her calf is a pleasure and a sign that people at least in the Keys seem to care about them as well.   ;o)
Posted by Bahama Bob's Rumstyles at 9:24 AM No comments: