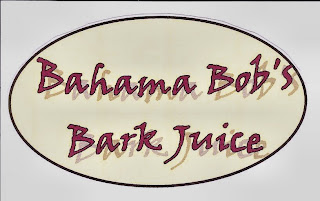 Bahama Bob's Root Juice is about to be filled for the last time next month and replaced with Bahama Bob's Bark Juice.    This is a new and different combination of barks that I have collected from all over the Caribbean Islands over the past few years.    This one is currently soaking in a honey and white wine blend that will later be discarded and the the barks will be put into the 151 Rum for a couple of weeks before they can be tasted and introduced for public consumption.     This one has big shoes to fill following in the shadow of the success of Bahama Bob's Root Juice.

I keep getting asked where did this idea come from.    I first got the idea at a bar called Fungi's on Water Bay on St. Thomas.     Throughout the world they have some version of the practice of infusing liquor with herbs, barks, roots, and almost anything else that is available through out the world.     In the Dominican Republic they have Mama Juana fro instance and many others throughoiut hte Caribbean.     As you can see, this on is filled with twigs and branches and stuff that I have no idea what it is.    This was a concern for me when making the original root juice.     I bought some cinnamon and agave from a vendor in St. Thomas, then when I got back to Key West, I went to the local grocery store and found the rest of the ingredients I needed.    This method has worked very well because there have been over 43 gallons of rum go through the roots in the past 27 months and the flavors are still going strong. 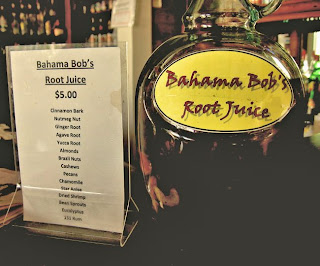 The time has come to let the success of the root juice to give way to a new idea and introduce Bahama Bob's Bark Juice.    We are going to refill the root juice bottle and seal it when the change over occurs just after the Miami Rum Renaissance Festival in late April.     The original root juice may be auctioned off at one of the appropriate charity auctions, but we are not sure yet.    Keep your eyes open at the Rum Bar Key West where you will be able to sample the new Bahama Bob's Bark Juice soon.   ;o)
Posted by Bahama Bob's Rumstyles at 9:19 AM No comments: