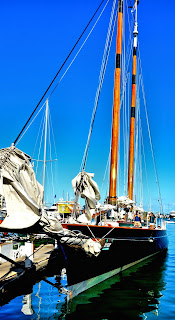 2017 was 30th anniversary for the Quantum Key West regatta, the seas overall were good and the winds were with in a range that made for some really good sailing.  The races were close and the boat numbers were good.  There was some top notch talent that were on hand to make the races close and exciting through out the week.  I was lucky enough to be a guest of the Mount Gay people on the America 2, a replica of the original America's cup boat.  It is a 106 foot boat that rocketed along in Wednesday's winds between 6 and 19 knots.  It was a great vantage point from which to watch the races.  I'd like to thank the Mount Gay people for having me out on the boat and to the crew of the America 2 for making the cruise absolutely wonderful.

Mount Gay Day,  Day 3 of the 30th anniversary Quantum Key West Race Week  saw a softening of the breeze on the racecourse and a corresponding shakeup on the scoreboard in some classes.  After a windy and wavy start to the regatta today’s conditions were far more manageable. Depending on the racecourse the wind ranged anywhere from a high of 10 to 13 knots before dying away to 7 to 9 knots by the third race in the afternoon. The sea state, while calmer than the first two days was still lumpy. 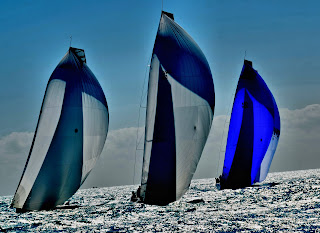 The low point boat of the day in the class, however, was Austin and Gwen Fragomen’s  of Newport, RI  Interlodge V.   The newest boat in the class from the Botin design group, Interlodge V posted scores of 1-1-8 and holds fifth place overall with 39 points.  "We had a great day on the water," said Interlodge tactician Andy Horton (Shelburne, VT) "In the first race we led all the way around. In the second we led, got overtaken on the run, but then retook the lead for the win. It was probably our best race yet in the new boat. In the third race we got caught in a little inside-out shift that dropped us to 8th and we couldn't dig out of that. But we're in the hunt and happy for that." 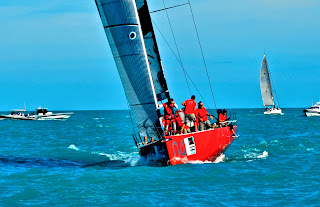 In the 52 Super Series Harm Müller Speers’ Platoon from Germany temporarily dropped out of the lead after placing 10th in Race 5, but then rebounded with a 2-5 in Races 6 and 7 to stand tied for the lead with Alberto and Pablo Roemmers’s (Buenos Aires, ARG) Azzurra, each with 31 points. Third place is held by Ergin Imre’s Provezza IX of Turkey with 32 points.
You can read more about the rest of the racing at https://keywestraceweek.com/2017-press-releases/253-race-week-reels-off-3-races 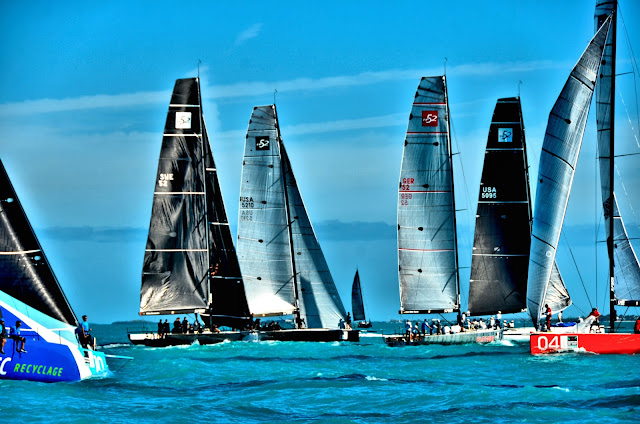