What is the Difference Between a Wine and a Rum Drunk? Nothing!

Here's the thing, a 'Gin drunk' isn't real. Neither is the idea that tequila turns you angry, or the stereotype of beer making you loud.   Plenty of people think of alcohol as a sort of personality management tool, you may turn to X liquor when you want to be the liveliest version of yourself, or steer clear of Y drink if you want to avoid sulking in a corner of the bar.  The result is more a product of your own psyche than a result of the specific type of booze you're drinking.   Here are some things to know about the drinking myth that just won't die.

All alcohol is created equal - but the same can't be said of all drinking session     In the U.S., a standard drink is defined by the Centers for Disease Control as 14 grams of pure alcohol, the equivalent of about 12 ounces of beer, 8 ounces of malt liquor, 5 ounces of wine, or a single 1.5-ounce shot of hard liquor (though that definition varies pretty dramatically from country to country). Chemically, the alcohol in any one of those things is the same as the alcohol in any other alcoholic beverage, it's all ethanol, and it works the same way whether you gulp it out of a shot glass or sip it from a bottle.  "Fundamentally, alcohol is alcohol whichever way you slice it." 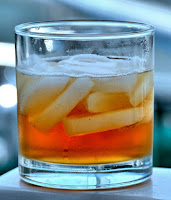 The difference, then, is in when and where you drink it, and whom you're drinking it with. "It depends on what mood you were in when you started drinking and the social context." If you're doing tequila shot after tequila shot, you're probably geared up for a wild night anyway.  On the other hand, if you're slowly working your way through a bottle of wine, odds are higher you're settling in for a more mellow evening and, by extension, a more mellow drunk.   Contrary to the way we see things, it's the context, not the drink, that matters, because the context often determines the drink.   When it comes to alcohol, we're mind-bogglingly susceptible to the power of suggestion.  Thinking you're drunk can be enough to make you act drunk, even when you're stone-cold sober.    In one 2003 study, for instance, half the subjects were led to believe that the tonic water they were drinking was actually vodka; compared to the people who knew what was really in their glass, these faux drinkers could be more easily swayed to remember false events surrounding the session, and more confident in their responses.

Similarly, a lot of your reaction to what you're drinking comes down to how you think you should be feeling, it is like you are acting from a script.   But it's not all in your head, the mixers, not the booze, are to blame for any side effects beyond drunkenness itself.   Let's compare two common combos, a rum and Coke and a vodka-soda, Think about how you'd feel if you drank each of those mixers on their own, taking booze out of the equation - a sugary, caffeine-y Coke is going to give you a buzz that plain old tonic water won’t.    A lot of this is a fine line difference depending on how your body reacts to the mixers that you choose to blend with your alcohol.  I know that personally I tend to stay mellower sipping straight rum and am able to last longer into the night compared to drinking mixed cocktails.  The simple fact is that your body on average will metabolize about 0.016% BAC per hour.   If you are at the legal limit of .08% BAC, it will take about 5 hours to get back to a 0% BAC.  Remember a standard drink will add 0.02% to your BAC and your body will metabolize it at a rate of 0.01% per hour.  If it takes you an hour to sip straight liquor versus 30 minutes to finish a mixed cocktail containing the same amount of alcohol, you will raise your BAC at the end of an hour to 0.03% versus 0.01% drinking straight liquor.

What you drink has little to do with your drunk, it is more about your attitude and what you drink it with.  This was an interesting thing for me, but I believe that it is correct.  You don't get drunker on rum than beer, unless you drink more of one than the other.

Posted by Bahama Bob's Rumstyles at 6:02 AM No comments: