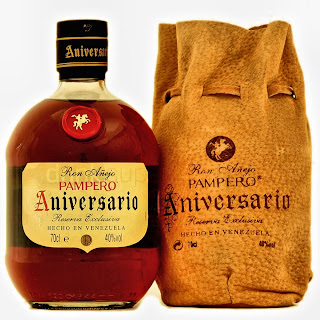 Pampero Aniversario Reserva Exclusiva is the pride and joy of Alejandro Hernandez, founder of Industrias Pampero, C.A. .   Founded in 1938, Pampero is credited with setting the standards that by which rum is produced in Venezuela.  Today it belongs to United Distillers, part of Diageo, the world's largest liquor holding company.

First introduced in 1963 to celebrate the distillery's 25th anniversary this amber mahogany rum is aged between 4 and 6 years in bourbon and whiskey barrels, became an instant hit.   Upon opening the bottle and pouring it into a class, you immediately pick up the aromas of sweet candy, nuts, and vanilla.  The palate picks up molasses, oak and a buttery sweet taste that leads to a  smooth, warm and long lasting finish.

Available in many many places, this award winning rum is a must have on your rum shelf.   Pampero Aniversario Reserva Exclusiva is one of the reasonably priced wonder rums that is available today.  ;o)

Posted by Bahama Bob's Rumstyles at 8:28 AM No comments: