Diageo PLC is following the lead of the food industry by offering calorie counts and other content information on many of its biggest-selling products, from Johnnie Walker Scotch whisky to Smirnoff vodka.


The world's biggest drinks company said Thursday that it would begin displaying per-serving nutrition and alcohol-content information on its labels and online, in what it said was a first for the industry.


That will include Guinness, which for much of the 20th century was marketed as "good for you" for its high iron content. Doctors even prescribed the stout to pregnant women.


The U.S. is likely to be the first market to see the new labels, which could hit the shelves in the next few months. Diageo has received approval from the Alcohol and Tobacco Tax and Trade Bureau for a "serving facts" panel to be added to its labels, with per-serving information on calories, fat content and alcohol by volume. Discussions with the bureau started nearly 10 years ago, according to a Diageo spokeswoman.


The first product to include the new label in the U.S. is likely to be Smirnoff, Diageo's biggest-selling brand in North America.


Nutritional labeling on food is a hot topic in the U.S. as consumers become more health-conscious. Late last year, the Food and Drug Administration issued rules requiring restaurants with at least 20 locations to display the calorie count of food items on their menus.
You can Read More at http://www.wsj.com/articles/diageo-plans-nutritional-labeling-for-alcohol-1426787647 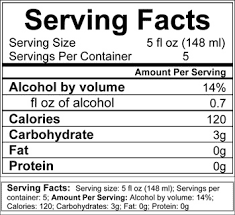 The TTB (Alcohol and Tobacco Tax and Trade Bureau) has issued some basic guidelines of the labeling.  The ruling allows "Serving Facts" statements that include the serving size, the number of servings per container, the number of calories, and the number of grams of carbohydrates, protein, and fat per serving. Additionally, Serving Facts statements may include information about the alcohol content of the product as a percentage of alcohol by volume and may also include a statement of the fluid ounces of pure ethyl alcohol per serving.
This is something that will really help in the controversy over what has been added to the spirits.  Sugar content, and other additives will become apparent with these labels, as long as people read them.  Kudos to Diageo for leading the way.   ;o)
Posted by Bahama Bob's Rumstyles at 7:00 AM No comments: