I love this idea, It seems that some politicians of Pennsylvania devised an idea using constitutional law to circumvent the embargo of Cuban Rum.  This could be a real boom for the Pennsylvania liquor business is they are the first and only state to have and sell Cuban Rum inside the United States. 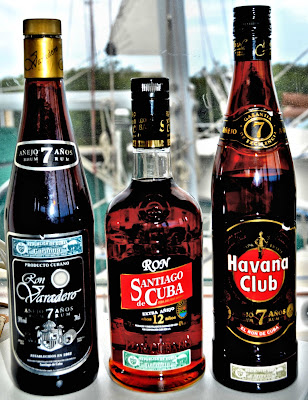 Pennsylvania legislators flew to Havana last month with a simple idea for getting around the 55-year-old embargo against Cuba: Trade our agricultural products for rum.   Two days in, the plan got even simpler: just buy a boatload of rum for state liquor stores and forget the embargo.  Republican state senate leaders say the 21st Amendment, which ended Prohibition 30 years before the embargo began, gives each state absolute control over alcoholic beverages.

"You can't just suspend the federal constitution," said Sen. Chuck McIlhinney, R-Bucks County and chair of the Senate Law & Justice Committee.   A Pennsylvania play for Cuban Rum would be an extraordinary move at a time when eased Cuban-American relations under President Barack Obama have given way to mostly guesses about President Donald Trump's stance. In the mid-1990s, Mr. Trump put out feelers for an investment in Cuba once the restrictions were eased, but while the Pennsylvanians were away on the island, Mr. Trump announced that he and Sen. Marco Rubio, R-Florida, "have very similar views on Cuba.''

Mr. Rubio has been a vocal critic of Mr. Obama's Cuba policy. Toss in conservative Keystone Republicans venturing into one of the last outposts of socialism - and finding bureaucrats who have their own spin on the art of the deal - and the plot is as thick as Cuban molasses.   If Mr. McIlhinney is right, and Pennsylvania has a winning constitutional argument to bypass the embargo, it's one that might have worked years ago. The Liquor Control Board is consulting its lawyers and planning a strategy that could end with Pennsylvania being the only place to buy Cuban rums - though likely not before a court battle.

Federal impounding of cases of Cuban rum at the Philadelphia docks until the case is decided in court wouldn't be the worst publicity; that surely would make national news and increase the appetite for the long-taboo spirits. But it's doubtful any ship owner would take that risk. Ships docking at Cuban ports aren't allowed to dock at U.S. ports for six months.

It seems more likely Pennsylvania would seek a declaratory judgment. A federal judge could issue a legally binding decision before any rum leaves Cuba.   "The Russians are gone,'' he said after five days and four nights in Cuba. "I didn't see any."   If this deal moves on fast-forward, the multi-day talks Pennsylvania state officials had with a tag team of Cuban government operatives in around Havana may come to be seen as one uncommonly quiet revolution.