Rum Journal’s Rum Awards is now in its sixth year, having grown into one of the world’s most important and influential measures in the rum category.  And every year, the judging by the Rum Journal special panel of judges gets more difficult, as rum continues to grow both in diversity and quality.  The most striking advancement of late has been the rum world’s renewed focus on the art of barrel aging, from special finishes to long-term aging.  This year’s final judging, performed at the terrific Casa de Montecristo by Prime Cigar in Miami, was the product of a year’s worth of tasting and research that ultimately evaluated more than 200 rums from the Caribbean and around the world.
Rum of the Year: Angostura No. 1, Trinidad 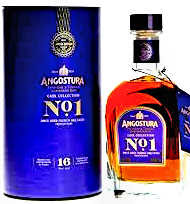 The premium aged rum category gets almost exponentially more competitive each year, but this year an old favorite returned to take back the Rum Awards crown. Trinidad’s Angostura No. 1 series, which won Rum of the Year with its first edition back in 2014, simply wowed this year’s panel of judges.
Rhum Agricole of the Year: La Favorite Privilege 1999 Cuvee Andre Dormoy
This magnificent expression is the result of a blend of 15 casks aged for at least 17 years at La Favorite’s cellars on the outskirts of Fort de France, Martinique. The rum, a production of just 3,500 bottles sealed with gold-colored wax, is a tribute to the last harvest of venerable rummaker Andre Dormoy, then patriarch of the family that owns La Favorite. It’s an elegant rum with notes of pepper, cacao, licorice and apricot, and the latest example of the overwhelming quality and thoughtfulness of La Favorite. The Agricole of the Year.
Best New Rum: Papa’s Pilar Sherry Finish
Rum Journal has long been a fan of now Key West-based Papa’s Pilar Rum, thanks to a decidedly drinkable profile. But the newest expression of Papa’s Pilar takes an already great rum and turns it into something more, thanks to an extra 30 days of final finishing in French Limousin Oak sherry casks from Spain. The result? A rounder, even better balanced Pilar with a richer, sweeter edge.
Best New Rhum Agricole: Rhum Neisson Collection Armada Millesime 1991
This is as ultra-premium as a rum can possibly get. The just-released, out-of-this-world Rhum Neisson is the most perfectly harmonious rum you will ever taste, a symphony of flavor notes all playing together. This 1991 vintage is the championship work of a legendary distillery.
Rum Company of the Year: Habitation Saint Etienne, Martinique
Our new award for 2017 honors rum producers who are excelling in the field, whether by innovation, branding or pure quality. And Martinique’s HSE is doing so at all three, but with a particular skill in the art of barrel aging. No producer on the planet is looking at the science of barrels like HSE is, with a level of expertise and specificity that’s unmatched. It manifests itself in a broad range of world-class rums, from special-finish agricoles using sherry, port and even whisky casks and even advanced techniques in selective barrel charring. They’re at the forefront of what’s possible in rum, and it’s an exciting thing to see..
Best White Rum: John Watling’s Pale Rum, Bahamas
Finding a drinkable molasses-based white rum is never easy, but the Bahamas’ John Watling’s Distillery has turned out an excellent product with its two-year-old John Watling’s Pale Rum. While it’s just about drinkable neat, it’s great in a mojito or a daiquiri.
Best White Rhum Agricole: A1710 La Perle Rare B69-56
This boutique rum distillery on the Atlantic coast of Martinique is producing some seriously intriguing expressions after launching last year. The latest? This organic white rhum agricole made from a single variety of “blue” sugarcane grown on a specific portion of the plantation. A fascinating, raw, authentic white rhum.
Best Gold Rum: Island Company Rum
The Island Company has long been known for its Caribbean-style fashion. So when we read this fashion house was launching a rum, we were a bit skeptical. Consider us converted. This rum delivers the goods. The Trinidad-sourced rum is remarkably smooth for a mildly aged gold rum, with an exceptional drinkability, even neat. In other words, it’s the perfect rum enjoyed on an afternoon boat ride in a linen shirt.
Best Spiced Rum: Siesta Key
Only one rum company has ever appeared on every Rum Awards since its inception: Drum Circle Distilling, a Sarasota, Fla. -based boutique distillery that, simply put, produces the best spiced rum on the planet. It’s called Siesta Key Rum, and its recipe of authentic spices and honey makes for an almost impossibly delicious expression.
Best Overproof Rum: Rivers Rum, Grenada
Produced at the venerable River Antoine distillery that dates back to the late 18th century is a local favorite that lives up to the hype. Bottled at 69 percent ABV, it’s a robust but smooth expression — just don’t bring it with you on the plane.

Best Bottle Design:  Rhum JM Edition Limitee
Martinique has long been at the forefront of bottle design in the rum world, but we simply love this year’s lush, rainforest-inspired bottle, a nod to the company’s home at the base of the Mont Pelee volcano. (There’s also a world-class white rhum inside).
Rum Bar of the Year: Rhum Room St Barth


It’s the Caribbean’s newest rum bar, but it’s already right at the top of the pack. The new Rhum Room in Gustavia, St Barth, which had its soft opening this month, is already home to the single-largest rum inventory of any bar in the Caribbean, with more than 400 rums, and it’s just the beginning. Even better? Its not just about supply – this is a full-fledged speakeasy accessed through a kitchen door of the 25 Quarter bar. It doesn’t get any better.