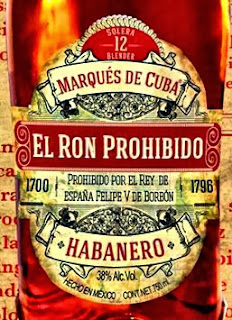 Fraternity Spirits World announced they were offering their new prohibition rum, "Marques de Cuba Habanero".   This is a rum is that originated in Mexico during the 1700's.   Large numbers of barrels filled with Spanish sweet wine arrived in the new world , after the wine was depleted,  the barrels would be refilled with high quality Mexican produced rum and sent back to Spain.


Tequilera Corralejo produces the new rum offering, "Marques De Cuba Habanero ‘El Ron Prohibido’". By the year 1700, Spanish ships were arriving in the colonies of the New World loaded with products from Spain. One popular product was sweet wine stored in barrels, which were later emptied after use. These empty barrels were filled with "Chinguirito", which is rum that was produced in Mexico, and shipped back to Spain."

As the rum aged in the sweet wine barrels during the trip back to Spain, it absorbed wood flavors and aroma from the sweet wine barrels, which gave it very special characteristics. The resulting rum became very popular in Spain.   "Chinguirito" was also known as Habanero because the last stop on the way back to Spain from the New World was Habana, Cuba.
The kick-off for "Marques de Cuba Habanero" will be at the TFWA(Tax Free World Association) World Exhibition in Cannes from October 20 to 25.  This is a show for "Duty Free and Travel Retail Premium" vendors.   There are several other spirits producers that will be having a kick-off for their newest spirits at the event.
I'm looking forward to my next trip to the Caribbean in December and a chance to pick up a bottle of this unique rum at one of the "Duty Free" Shops at the airports.  ;o)
Posted by Bahama Bob's Rumstyles at 8:17 AM 5 comments: