Just When I Thought it was Over.

I guess it isn't over even when it is over.  The litigation between Bacardi and Cuba is over regarding the use of the Havana Club trademark in the United States when the U.S. Supreme Court declined to intervene.     The latest move is a petition to the U.S. Patent and Trademark Office to let them know that the same tactic that the trademark office used to refuse the money for the renewal of the trademark (Cuban Embargo) means that the Havana Club trademark is frozen while the embargo is still in place. 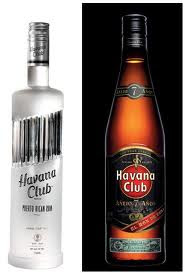 This is an interesting approach, especially when this is all about a time when the embargo is finally lifted before Havana Club Rum can be imported into the United States.     Patrick Ross of the U.S. Patent and Trademark Office was quoted as "Cubaexport can go back and take one more bite of the apple", but when the Trademark Office makes it's decision, " this is their last shot a far as we're concerned."

The attorneys for Cubaexport believe that trademark registration can not be revoked and remains   "frozen while the embargo of Cuba us in place".    This case began in 1994 when Bacardi applied for a U.S. Trademark for Havana Club after it purchased the rights for the brand from the Arechabala Family, the originators of the rum in Cuba and sold Havana Club to the United States as far back as the 1930"s.     The problem lies in that the Arechabala Family went into exile and Cubaexport successfully registered the Havana Club Trademark in 1976.

Both Bacardi and Havana Club were the best brands in Cuba when the 1959 revolution took place and the Castro Government expropriated the holds of both the Bacardi and the Arechabala Families.    This rum war is not about today, but rather the future after the embargo of Cuba is lifted.     One other little item that was pointed out by Patricia Neal of Bacardi, "ownership rights are secured through use and are separate from a trademark registration.   Bacardi owns the U.S. rights to the brand based on use and as a successor to the original owners."

It is really expected that the United States Patent and Trademark Office will reject Cubaexport's petition and go ahead with the Bacardi application for the Havana Club trademark to proceed.   This is as so many things that go to litigation has been a long and drawn out process that maybe finally coming to an end.   ;o)
Posted by Bahama Bob's Rumstyles at 8:09 AM No comments: