Isaac Passes Key West with Only a Wimper 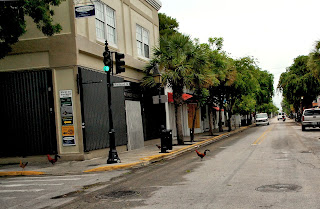 Issac is gone past Key West and headed up into the Gulf of Mexico.   The effects in Key West were a lot of work boarding up houses, businesses and many miles of extra lines applied to boats.    The really great thing that came out of Isaac is people took the time to clean up their loose debris around their houses and docks.

Duval was only occupied with weather people from the media and a few chickens as I drove to the Rum Bar yesterday morning.    By the time I got my inventory work done and the bar ready to open, there were people waiting outside ready to come in and start the "Hurricane Party", even though it was still only a tropical storm.  The good news is it still remains a tropical storm today.   The big event came and passed with a fair amount of rain and some gusty winds.   The  winds were strong enough to clear all of the dead fronds from the palm trees on the island.   Driving my scooter home at 6ish last night, the winds were still blowing around 30 mph and a little bit of rain was still falling.    I've gotten wetter in a normal every day thunder storm, but still it was nice to be back aboard the boat. 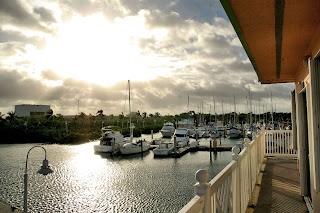 Today there are still some gusty winds blowing around, and they say there will be a few rainy times, but I met the sunshine when I got off of the boat and headed down the dock heading to the office.     I am happy to report that there were only very minor bits of damage that I noticed as I went to town this morning and the boards are virtually all off of the windows and doors this morning. 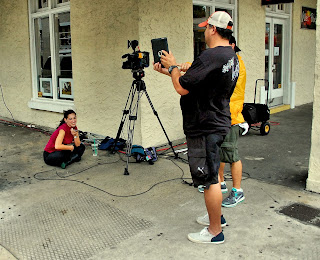 Last night the last of the "Hurricane Bob" magic potion was consumed to make sure that the winds didn't get out of control.  As usual, the magic in the mix decimated the storm before it got to Key West.   Do I really believe this, well, probably not.  Althrough the past 10 or so storms that have approached since the residents on the docks have sat and raised our cups in defiance, none have strengthened and most lost their strength or turned away.   Is this a coincidence, I really don't know, but until it fails us we will continue to make the "Hurricane Bob" and drink it up in defiance until it does fails us.   By the way, we were all prepared for the worst long before we started the traditional defiance party.

This is the last official Bahama Bob Rumstyles Hurricane Report form The Rum Lab in Key West, until the next storm.   ;o)
Posted by Bahama Bob's Rumstyles at 10:31 AM No comments: