Today is a relaxing beach day with things really getting underway this evening.    The weather here could not be any better, nice sea breeze and cleare blue sky's.     Today the remainder of the XP's arrived for an afternoon of poolside conversation and catching up on what we have been doing since our last meetings. 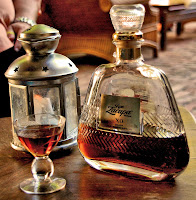 Things are really getting  underway around 6pm as we migrate to the "Broken Shaker" for the Ron Zacapa VIP Party.    The party startes with a sampling of Ron Zacapa XO in the garden.     Bar-b-qued jerk chicken and ribs followed by some very nice Ron Zacapa punch and rum soaked goodies.     It was a great time socializing with so many friends that I hadn't seen in quite some time.   The combination of good food and fine rum mad this a perfect start to the evening, but it was time to head back to the Deauville for the Great Rum Challenge. 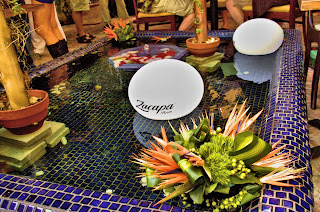 The Great Rum Challenge was a chance for the VIP's and other industry people to try their skills at identifying 8 premium rums for a chance to join the XP's as a judge for this event.    There were two parts to the Challenge.  First identify the 8 rums, then a test of your knowledge about the years that are on the label of which brands.  For instance 1919 on the Angostura Rum from Trinidad, or the 1888 on the Brugal Rum from the Dominican Republic.   This turned out to be a good time for all of participants and the rest of us that got to sit and sample the rums. 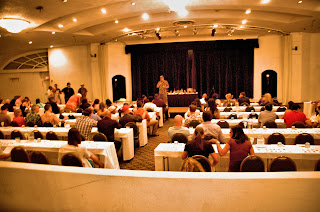 Now we are off to North Miami and the first Miami distillery in many years.   The Caneca Distillery is about to introduce it's first rum to the market in just a short few weeks.    Miami Club is what the rum is called and it is a very nice white rum  that is aged to the sounds of salsa music.    This is a means of speeding the very unique aging process.     The rum is aged in stainless steel vats that have hickory rods that have been spirally cut to expose the rum to many times more surface of wood that a barrel can.    The music keeps the rum vibrating and moving through the wooden rod speeding the aging process.   I guess that it would be hard to call this process resting, because the rum is doing anything but resting, it dances to the music of Miami throughout the process.    The rum is produced in a pot still named "Sugar Lips" who will soon have a sister still in order to be able to keep up with the production that is anticipated 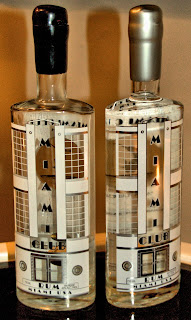 The evening came to a rockin' finale at the "Liar's Club" back here in the hotel.   It has been a wild and crazy start to this year's Miami Rum Renaissance Festival, and it usually gets better and better as the days move ahead.    Today starts the first of six judging sessions and we are about to go for breakfast with Flip Flop Rum, another brand new rum offering.   Today's activities will be continued in tomorrow's edition.   ;o)
Posted by Bahama Bob's Rumstyles at 9:03 AM No comments: