Bacardi and the Cuban Revolution

There is a huge amount information about the role of the Bacardi family and the Cuban Revolutionaries I discovered as I researched this article.  This is becoming very interesting in light of the court battles going on between Cuba and Bacardi over the "Havana Club" trademark and theis being the 150th annaversary of the company.     It seems that at least initially, the  Bacardi family supported the Cuban revolutionaries including Fidel Castro and the broader "M-26-7 movement".   This support came from the family members, employees, and facilities that could be put to use my the movement.   The company supported the revolution with parties and in the rum advertisements as well.

Their support soon turned to opposition as pro-soviet Che Guevara wing of the movement began to dominate and Castro turned against the American interests.    The family and the company maintained a strong opposition to Fidel Castro's revolution all during the 60's.     Bacardi and the family left Cuba after the Castro's regime began confiscating family assets as part of the nationalization plan and the banning of all private property and bank accounts.    Fortunately for the Bacardi's they had already started moving many of their ownership of trademarks,assets, and proprietary formulas out of Cuba because of a distrust of then leader, Fulgenico Batista.    The company had started new branches in the Bahamas, Mexico and Puerto Rico to protect itself.


Embittered Bacardi helmsman, Jose Pepin Bosch is said to have bought a surplus Douglas B-26 bomber in hopes of bombing Cuban oil refineries, and had allegedly was involved in a CIA plot to assassinate Fidel Castro, his brother Raul, and Che Guevara.   This was reveled during the congressional investigations into John F. Kennedy's death.

This whole story is really covered well in a book by Tom Gjelten titled "Bacardi and The Long Fight for Cuba.    You can find a great review of the book at this blog by Greg Weeks.  http://weeksnotice.blogspot.com/2011/06/tom-gjeltens-bacardi-and-long-fight-for.html

Tom Gjelten's Bacardi and the Long Fight for Cuba

There are really two parts to Tom Gjelten's Bacardi and the Long Fight for Cuba (2008).  The first is a history of Cuba from the 1860s to the 1960s, centered on Bacardi and the city of Santiago.  The second is a narrative of how Bacardi became global and also obsessed with fighting Fidel Castro.  The Bacardi company went from being an icon of Cuba to a conglomerate struggling to maintain a Cuban identity.
You can read the rest of the story on his blog. 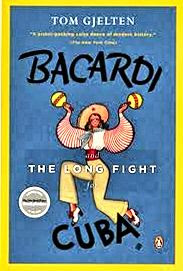 The subject is one of interest and need some further exploring, as it is like a great novel, but all of this really happened.   ;o)
Posted by Bahama Bob's Rumstyles at 9:20 AM 1 comment: