Interesting Distilleries to Visit in the Caribbean 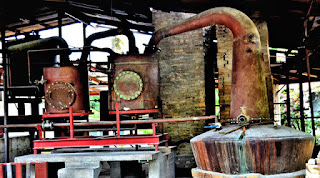 You will find Rivers Rum 'up north', near the beautiful (but treacherous) north east coast. Not  far from Tivoli, not far from Lake Antoine. The place dates from 1785, though there may have been distilling activity there even further back, but this is a distillery that runs all year.
A bit of a contradiction: the concentration of sugar in cane is at its highest during the dry season (Jan to May), but the water wheel which powers the cane press is obviously more likely to work when there is plenty of water in the river, during the rainy season (June - Dec.)   The simplicity and antiquity of the place is what makes River Antoine so interesting.. Bundles of cane are crushed twice, then placed in the island's only railway truck which is trundled along the island's only railway line for the very short trip to a tip. Here the cane dries in the sun and, now known as 'bagasse', is used as fertilizer for the cane fields.

Hidden in the southern countryside region of Barbados, on a former sugar plantation of about 8 acres, sits the Foursquare Rum Distillery and Heritage Park. This working rum factory that Richard Seale masterfully operates is world renown for its rums, producing a wide range including the flavorful brands like  Doorly's, Old Brigand, E.S.A.Field and many more. Foursquare Rum Distillery is the proud winner of the Rum Distillery of the Year in November 2016 at the IWSC in London, UK.
This working rum factory, the Heritage Park with its historic buildings, colonial architecture and folk museum, offers a step back in time and a tribute to the important role that sugar and rum has played in Barbados' history.

Opened in June 2013, our new Cayman Spirits Company Distillery is Grand Cayman’s largest
Distillery, and the only source of handcrafted spirits in the islands. We’d love to show you around.  Come get a behind-the-scenes look at our unique approach. Inside the custom-built 5000 square foot facility you’ll see our 1200 gallon Vendome copper pot still, the 30 foot tall Gun Bay Vodka tower, and our original Christian Carl pot still we use to perfect Seven Fathoms Rum.
St. Lucia Distillery - St. Lucia 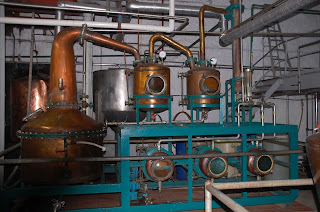 St Nicholas Abbey has always been a sugar plantation house. The exact origin of its name is not known but rumored to have been named after George Nicholas, husband to Berringer's granddaughter, Susanna.  Berringer was killed in a duel with his neighbor, Sir John Yeamans, who then married Berringer's widow and claimed the abbey as his property.  The abbey was no longer a functioning plantation after 1947.   Sugar has been grown on the plantation since 1640 and there is still the evidence of the mill and sugar making edifices. Sugar was processed on the property until 1947.  Since 2006, the abbey is owned by local Barbadian architect, Larry Warren. Warren has restored the abbey as well as the rum making distillery on the sight.  YoWarren is currently developing a small private railway system on the property, the St. Nicholas Abbey Heritage Railway, to be completed by the end of 2018.  St Nicholas Abbey is currently a well-preserved museum, successfully recreating 18th-century plantation life.  There is a rare 1930s film of life on a sugar plantation that is available for viewing in the museum. Listed by the Barbados Tourism Authority as one of the "Seven Wonders of Barbados.   The property has attracted several thousand visitors a year.