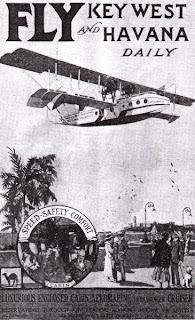 Aviation in Key West began in 1913 when a biwinged seaplane was flown by Augustin Parla flew from here to Muriel, Cuba.    This is only the beginning of a very colorful history aviation has carved here in Key West.     In 1917 the U.S. Navy dredged a seaplane base at Trumbo that also was used for dirigibles during World War I.     In 1918 a twin engined U.S. Navy Seaplane flew to Cuba from Trumbo.


On November 1, 1920, Aeromarine West Indies Airways flew it's first scheduled international passenger and airmail service in the United States.   This service was flown daily from Key West to Havana, a 60 minute flight using Aeromarine Plane and Motor Company converted U.S. Navy F5L's for civilian passenger service.        Aeromarine also flew to Miami and Bimini during their first flaying season.     Before Aeromarine West Indies Airways ceased operations in early 1924 they had carried over 30,000 passengers and more than 300,000 pounds of freight.     The loss of the "Columbus" on a flight was the only fatal accident  in just over three years of operation.    Many of the airline procedures used today were instituted by Aeromarine West Indies Airways in their early years.    They also were the first to offer in-flight-movies, baggage tags, and the first airline ticket office.

On January 6, 1928 Key West was the beginning of still another airline.     Pan American  chartered a Fairchild FC2 floatplane to make it's first mail flight to Havana.     Pan American moved to Miami in 1934, but reinstituted Key West service after the 1935 hurricane that ended Flaggler's train service to Key West.

Meacham Field, the primary runway for Key West, initially pressed into service by the Army after the bombing of Pearl Harbor.    In the later parts of World War II, the Navy  took over Meacham as an adjunct to Trumbo Seaplane Base.     It was the main Naval Air Station for fixed wing and Dirigible operations.     After the War the control was turned back to the city of Key West and eventually renamed Key West Municipal Airport.     In 1953 the City turned control of the airport to Monroe County to allow for CAA grants and the renaming to Key West International Airport. 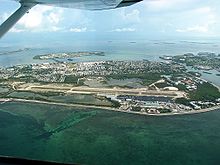 Today we have modern jet airline service in Key West that owes it's existence to the foresight of a few forward looking people that saw aviation had a transportation future here in Key West.      As a former aircraft owner who has flown in and out or Key West International many times I can really appreciate the bravery and the skills of those who pioneer the service to and from Key West.     Remember it is only a 2 x 5 mile island in the middle of the ocean, and no GPS, just a compass and a chart to guide you here.     Thanks to all of them, because today we come and go on a very regular basis thanks to them.     ;o)