It worked, I was able to get out and enjoy a day on the water.  I turned off the motor upon arriving at Duck Key just north and east of Key West and drifted to the north toward Fish Hawk Key.  The partly cloudy skies and the warm sun made for a fabulous day of relaxation.   Drifting across the 6" to 12" deep water gives you a chance to watch the sea life moving in and out of the sea grasses as well as watching the skies and mangroves for very interesting bird life.     The many trips I have made out into the keys around Key West, it never gets boring or even repetitive.  There is always something new out there in front of you.

This day found an Egret perched in the top of a mangrove near Fish Hawk Key, along with several Cormorant "Condos".        The Egret sat there and watched as we approached and remained there watching us as we watched him.   Finally when we drifted up to about forty of yards away off he went.    There were several Cormorants there in the same mangrove key.


The approach to Fish Hawk Key  got our attention as a pair of Osprey appeared over the mangroves that provide shelter and a nesting ground for the large and beautiful birds.   The pair would alternately circle us and let us know they knew we were there.   We continued to drift past hem and they headed back to their nest just in from the edge of the water.    As we continued drifting past Fish Hawk Key toward Jewfish Basin, I spotted a Frigate Bird making high circles overhead.   The Frigate is a great fish catcher, and can be found circling above schools of fish.

All in all quite a wonderful day out on the water, and I look forward to getting out there more often now that summer is approaching and things will be slowing down here in Key West.  ;o) 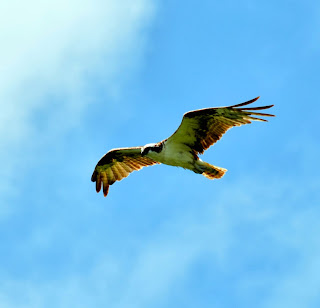 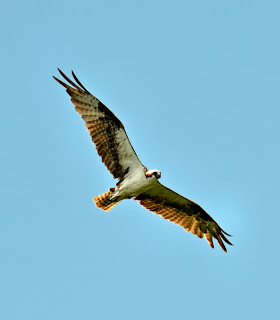 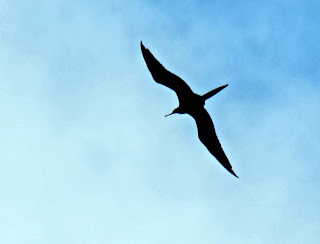 Posted by Bahama Bob's Rumstyles at 9:05 AM No comments: