Are our Tropical Cocktails Real?

As a bartender in a tropical rum bar, and around tropical bartenders all of the time, I really have to question whether you are really getting the real deal or just some fruit juice, rum, and enough grenadine to make it pink and tropical tasting.

One of the things that makes our bar different is the quality of the cocktails that we serve, in that all of the cocktails are made as close as possible to the original recipes and made from scratch, not from commercially bottled mixes.      The integrity of the cocktail is an important thing to me, even in the Rum Lab, we may start with an original cocktail, then go to work on it to improve it, but when the research is completed it is renamed as a different cocktail.    Unfortunately many people don't know the difference between a Mai Tai and a Singapore Sling, so if you put some rum fruit juice and enough grenadine to get the right color many of them are happy.


Jeff Burkhart, a Marin County, California award winning bartender and author wrote an article in the San Jose Mercury-News on the subject that I would like to quote on the subject.

"Many drink recipes call for essentially the same ingredients but in different proportions, or maybe with one or two slightly different variations. The Singapore Sling however, can be made really differently, which I tried to explain to Mr. Hat.
The Singapore Sling was invented around 1915 at the Long Bar in the Raffles Hotel Singapore. The hotel is named after Sir Thomas Stamford Raffles, diplomat and imperialist extraordinaire, who founded the city of Singapore in 1819 after some extremely questionable diplomatic dealings involving the Dutch, the British Navy, the East India Company, a man named Hussein Shah, and quite a few bribes.
By the time bartender Ngiam Tong Boon stepped behind the plank, Singapore had been a British colony for nearly 100 years. There he mixed together a virtual mosaic of European colonialism using gin (a Dutch or British product), Cherry Heering liqueur (Danish), pineapple juice, lime juice, Cointreau and Benedictine (French), Grenadine (also British) and Angostura Bitters (invented by a German in Simon Bolivar’s Venezuelan army). Boon named his drink the Singapore Sling. Traditionally slings are a liquor, sugar, lemon juice and water, one step away from a sangaree which doesn’t have the fruit juice, and one step before a daisy which has the addition of grenadine (or another fruit cordial). Realistically his drink should have been called a Singapore Daisy, but now that just doesn’t have the same cachet, now does it?
Boon’s Sling would become world famous, slaking the thirsts of notable world travelers like Rudyard Kipling, Joseph Conrad and Noel Coward. But by the time adventurer/writer Frank Buck contributed his Singapore Sling recipe to the 1935 book So Red the Nose (which also featured Hemingway’s Death in the Afternoon cocktail) the drink had lost not only the Cointreau, but the pineapple juice and the grenadine as well. So began the Sling’s long march towards mediocrity. The 1950’s and 1960’s with their emphasis on premade items (think canned cocktails) further stripped the drink of ingredients, until the 1980’s when it consisted of little more than bottled sweet and sour, gin and grenadine (back, but now replacing the cherry liqueur). More recently, with the reappearance of quality products like Cherry Heering and the use of fresh juices the “new” Singapore Sling again becomes a much more palatable drink, albeit quite a bit different one than the original.
“I can make it with gin, Heering and fresh lemon juice,” I said. “We make it ‘up’ in a martini glass so the Herring sinks to the bottom, like grenadine does in a Tequila Sunrise,” I said.
Mr. Hat wrinkled his nose in distaste. Instead of responding he peered intently at the cocktail list. I switched from one tired foot back to the other, hoping that he wouldn’t order anything that contained the juices now locked up in the back refrigerator.
“I’ll have the Bramble,” he said after a relatively long pause that required another foot switch on my part. I sighed. Our Bramble was really nothing more than a version of the newer Singapore Sling, but on the rocks with raspberry liqueur instead of cherry. I opened my mouth to say something about that, but instead closed it and simply made the drink. Less than twenty minutes later I was in my car on my way home.
Most of the time in the restaurant business the customer will get the full treatment, but sometimes- say 15 minutes after closing-they will get whatever is easiest." 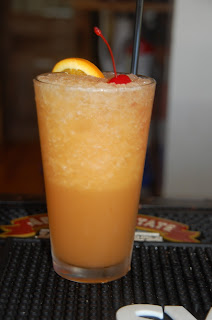 I guess that really just about covers the subject.     ;o)

Posted by Bahama Bob's Rumstyles at 8:45 AM No comments: